Nigeria signed the Treaty on the Prohibition of Nuclear Weapons on 20 September 2017 and ratified it on 6 August 2020. It participated in the negotiation of the treaty at the United Nations in New York in 2017 and voted in favour of its adoption

Geoffrey Onyeama, the minister of foreign affairs of Nigeria, signed the treaty at a high-level ceremony in New York when it opened for signature on 20 September 2017.

In an address to the United Nations ahead of the signing ceremony, the president of Nigeria, Muhammadu Buhari, said: “The crisis in the Korean peninsula underscores the urgency for all [UN] member states, guided by the spirit of enthroning a safer and more peaceful world, to ratify without delay the treaty prohibiting nuclear weapons.”

Nigeria’s federal executive council approved ratification of the treaty at a meeting on 27 November 2019. The instrument of ratification was deposited with the secretary-general of the United Nations on 6 August 2020, the 75th anniversary of the atomic bombing of Hiroshima.

In a video message to commemorate the bombing, the Nigerian diplomat Tijjani Muhammad-Bande, in his capacity as the president of the UN General Assembly, said: “We are fast approaching the requisite number [of ratifications] for the treaty to come into force, and we cannot afford to slow our pace now. I call on all member states to sign and ratify the treaty.”

Nigeria has promoted universal adherence to the treaty, including by co-sponsoring a UN General Assembly resolution in 2019 that called upon all states to sign, ratify, or accede to the treaty “at the earliest possible date”.

In a statement to the United Nations in September 2019, Nigeria said that it would “continue to engage other nations on the need for the treaty to be taken as an important global instrument for the promotion of international disarmament and nuclear non-proliferation”.

It said in October 2019 that it “remains proud to have participated in the processes leading to [the treaty’s] adoption, as well as being one of the first states to sign the treaty”, and its support is “guided by our principled position on the denuclearisation of the world”.

In its opening statement to the negotiating conference in 2017, Nigeria described the initiation of the treaty-making process as “an epic accomplishment” after almost half a century “of minimal progress” in multilateral efforts to achieve nuclear disarmament.

Nigeria, Austria, Brazil, Ireland, Mexico, and South Africa comprised a “core group” of states that played a leading role in bringing the negotiations about and ensuring their ultimate success.

In 2016, Nigeria was a co-sponsor of the UN General Assembly resolution that established the formal mandate for states to commence the negotiations in 2017 on “a legally binding instrument to prohibit nuclear weapons, leading towards their total elimination”.

Nigeria was among 127 states that endorsed a “humanitarian pledge” in 2015–16 to cooperate “in efforts to stigmatise, prohibit, and eliminate nuclear weapons”. The pledge was instrumental in building momentum and support for convening the negotiations.

Nigeria is a state party to the 1996 Treaty of Pelindaba, which established Africa as a nuclear-weapon-free zone. 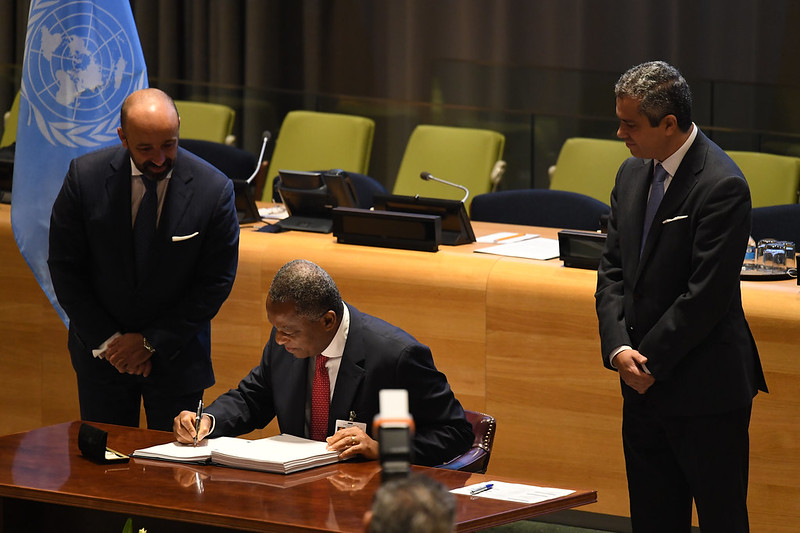