On April 4th, 2019, the AU Peace and Security Council held a sensitization session on disarmament, including landmines and the UN Treaty on the Prohibition of Nuclear Weapons. ICAN was invited to brief the Council on the risk of nuclear weapons use, and the crucial role African States can play in ending them, through signing and ratifying the TPNW.

ICAN’s Executive Director, Treaty Coordinator and a delegation of campaigners thus visited the African Union Headquarters. Watch excerpts of Beatrice Fihn’s address to the Council, or read the full speech below.

Read ICAN’s paper on the role of the African Union in advancing the TPNW – in English, in French, and in Portuguese.
Download ICAN’s factsheet on signing and ratifying the treaty.

Statement to the AU Peace and Security Council

It is a great honour for me to speak here today, on behalf of the International Campaign to Abolish Nuclear Weapons (ICAN).

Across the world we have seen the devastating impacts of weapons on civilian populations. Humanitarian disarmament is a preventative approach aimed at reducing human suffering through the creation of norms and laws around weapons with indiscriminate and inhumane impact on civilians.

As we meet here today, nuclear weapons are again on the international agenda.

And it might seem like this is an issue for nuclear armed states only. Africa may be free of nuclear weapons, but the continent is not free of their effects.

The use of nuclear weapons anywhere would have disastrous consequences that would quickly ripple across the world.

Just weeks ago, two nuclear-armed states — India and Pakistan — fought out a brief armed conflict that could have seen each use nuclear weapons against the other.

Had they done so, the devastating consequences would not have been confined to South-East Asia. Experts have calculated that nuclear war between the two nations involving just 100 Hiroshima-sized weapons would cause worldwide climatic disruption and a catastrophic decline of up to 20% of rice and corn production across the planet. Such decrease in global food supplies could be putting up to 2 billion people at risk of starvation.[i]

It’s not hard to see how Africa could suffer tremendously from a crisis in which they had no involvement, as the consequences of nuclear weapons do not stop at borders. The impact on food security, migration, infrastructure, and development would be devastating. And just as with other conflict, war and disasters, the most vulnerable communities will be disproportionately affected.

But not only would the use of nuclear weapons impact this continent. The development and testing of these weapons already have.

The world is still paying the price for atmospheric testing of nuclear weapons in 1944–80. Algeria suffered four atmospheric nuclear tests at the hands of France in the early 1960s, followed by more than a dozen underground tests. From February 1960 to February 1966, France detonated a total of 17 nuclear bombs in the Algerian Sahara.

The tests in Algeria spread radioactive fallout across the country, across Central and West Africa, and across the Mediterranean, including southern Europe. Irreversible contamination was inflicted on people, animals, vegetation, and the environment.[ii]

In 1998 at the UN General Assembly, Nelson Mandela said, “We must ask the question, which might sound naïve to those who have elaborated sophisticated arguments to justify their refusal to eliminate these terrible and terrifying weapons of mass destruction – why do they need them anyway!

In reality, no rational answer can be advanced to explain in a satisfactory manner what, in the end, is the consequences of Cold War inertia and an attachment to the use of the threat of brute force, to assert the primacy of some States over others”.

Mandela recognized that nuclear weapons is an issue of power and privilege. That nuclear weapons are rooted in injustice, inequality, and colonialism. For decades, a handful of nuclear-armed states locked the rest of the world out of their negotiations about our shared future.

But that is changing.

ICAN commends and supports the work of the African Union on disarmament efforts, such as silencing the guns in Africa by 2020, which focus on tackling the proliferation of weapons and strengthening security and defence institutions through multilateral cooperation and international law.

We believe that to address weapons issues, we must focus on the humanitarian impact and work together through international law and multilateralism.

For nuclear weapons, the Treaty on the Prohibition of Nuclear Weapons changes the status quo.

Three groundbreaking conferences on the humanitarian impacts of nuclear weapons in Oslo, Nayarit and Vienna changed the discourse around nuclear weapons and empowered non-nuclear weapon states to take ownership of the issue.

The humanitarian perspective and mobilization of countries all over the world led to the development of a treaty that bans nuclear weapons on the basis of their inhumane, indiscriminate and unacceptable consequences for civilian populations.

The TPNW was adopted on 7 July 2017 at the United Nations, with the support of 122 states, including 42 African states.

For decades, African states have taken leadership on nuclear disarmament.

The synergy between these two treaties is evident. Progress in implementing one supports implementation in the other. In March 2018, states parties to the Pelindaba Treaty called on AU Member States to “speedily sign and ratify the treaty”, emphasising that this “advances international law in nuclear disarmament and is consistent with the goals of the Treaty of Pelindaba.”[iii]

To date, 21 African states have signed the TPNW. ICAN warmly welcomes the courage and commitment shown by each of these states, Algeria, Angola, Benin, Cabo Verde, Central African Republic, Comoros, Congo, Cote d’Ivoire, DR Congo, Gambia, Ghana, Guinea Bissau, Libya, Madagascar, Malawi, Namibia, Nigeria, Sao Tome & Principe, Seychelles, South Africa, and Togo. And in particular, we welcome the leadership of The Gambia and South Africa, who have also already ratified it. We are encouraged to learn that various countries have begun the process of ratification domestically, and we look forward to welcoming more African states as full states parties of this treaty soon.

We encourage you to sign and ratify the treaty and lead the development of a new legal norm against nuclear weapons to protect Africa and the world from the impact of nuclear weapons use.

The TPNW enters into force once 50 states have ratified it; worldwide 22 had done so as of the end of March 2019. With 54 countries and 41 Pelindaba states parties, Africa is in a powerful position to bring this treaty into force and lead the changing legal landscape on nuclear weapons.

It is incumbent on each nation to seize control of their own destiny before its taken from them due to geopolitical events that they had no part in. Each nation can do just that by joining the growing community of nations that are part of the treaty that bans these horrifying weapons that have no military utility.

Each nation can refuse to be passive hostage to the whims of a few men with their finger on the button; only a late night tweet or insult away from plunging us all into nightmare of their making.

By ratifying the treaty, African nations can choose their own destiny and make history on the side of reason and humanity.

[iii]Conclusions of the 4thOrdinary Session of the Conference of States Parties to the African Nuclear-Weapon-Free Zone Treaty (Treaty of Pelindaba), 14–15 March 2018.

With the support of the City and the Canton of Geneva 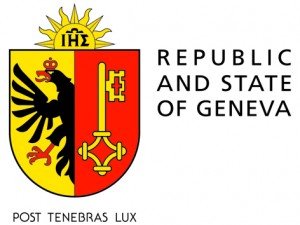