No one can deny that 2020 was a challenging year. Plans that were made when the year started had to be adapted over and over again, amid the uncertainty, worry and restrictions caused by the pandemic. But the movement to eliminate nuclear weapons was able to do incredible things this year anyway, and we want to share some of these achievements with you:

Let's start with the big one. On October 24th, we reached that crucial milestone for the UN Treaty on the Prohibition of Nuclear Weapons:  the 50 ratifications needed for the treaty’s entry into force.

Can we have your attention? 📢 WE GOT IT! 🙌 The UN Treaty on the Prohibition of Nuclear Weapons just reached 50 ratifications. On 22 January 2021, the ban on nuclear weapons will come into force. The #nuclearban is here. pic.twitter.com/8aM1JAlpjb

That is no small feat! Even as governments around the world restricted their focus to the pandemic, and even the UN dealt with lockdown restrictions, we were able to work together with them to ensure more countries could join the treaty.  We began the year with 34 states parties and 80 signatories and now have 51 states parties and 86 signatories:

The treaty will enter into force on January 22nd 2021.

This moment didn't just happen, it took years of tireless effort by our campaigners all over the world, and particularly in this strange year, it was wonderfully rewarding to see people power lead to such concrete results that will change the world.

But that's not all we did.

Starting the year off right with the ICAN Paris Forum

In early February we brought together hundreds of campaigners, creatives and students at the ICAN Paris Forum to talk and learn from each other about the impact of nuclear weapons and what it takes to change the world.  Watch the recordings here.

When the pandemic broke, we exposed just how the billions spent on nuclear weapons by the UK, France and the US in 2019 could have been spent on ICU beds, ventilators and medical workers.  We quickly followed it up with in-depth research into the massive spending by the 9 nuclear armed states, who pumped a joint 72.9 billion dollars into their nuclear weapons programmes in 2019 alone.

Commemorating the 75th anniversary of the bombings of Hiroshima and Nagasaki

With major events like the NPT review conference in May postponed, we spent the summer months preparing for the 75th anniversary of the bombings of Hiroshima and Nagasaki. We wanted to change the narrative, to make sure that the voices of the survivors - and through them, the catastrophic humanitarian consequences of nuclear weapons - were front and centre.

With in person events seeming unlikely, we worked with museums, media outlets, writers, photographers, video teams, website creators, ICAN partners in Japan and of course, the Hibakusha, to make sure the issue got the coverage it deserved, and that the Hibakusha’s call for all countries to join the TPNW was heard. Here is just a sampling of the powerful stories that set the tone for the coverage of this important historic commemoration:

Leaders and the public speak up for the TPNW

In addition, our work to gain support from all corners for the treaty continued unabated.  Like every year, our campaigners around the world also encouraged their city officials and elected representatives to speak up against nuclear weapons and call on their governments to join the treaty.

In June, the Australian Parliamentary Friends of the TPNW group was launched.  In Germany, where public support for the treaty is also high, parliamentary leaders called for the removal of U.S. nuclear weapons from Europe. And in Belgium, the new coalition government also recently agreed to consider the positive implications of the treaty, which is not only in line with four out of seven coalition parties in the new government have expressed their open support to the TPNW in recent years but also with the 77% of the public support joining the TPNW.

The Treaty also got support from high places. In October, fifty-six former presidents, prime ministers, foreign ministers and defence ministers from 20 NATO member states, as well as Japan and South Korea, issued an open letter calling on current leaders to join the Treaty on the Prohibition of Nuclear Weapons. The former UN secretary-general Ban Ki-moon and two former NATO secretaries-general, Javier Solana and Willy Claes, are among the co-signers. 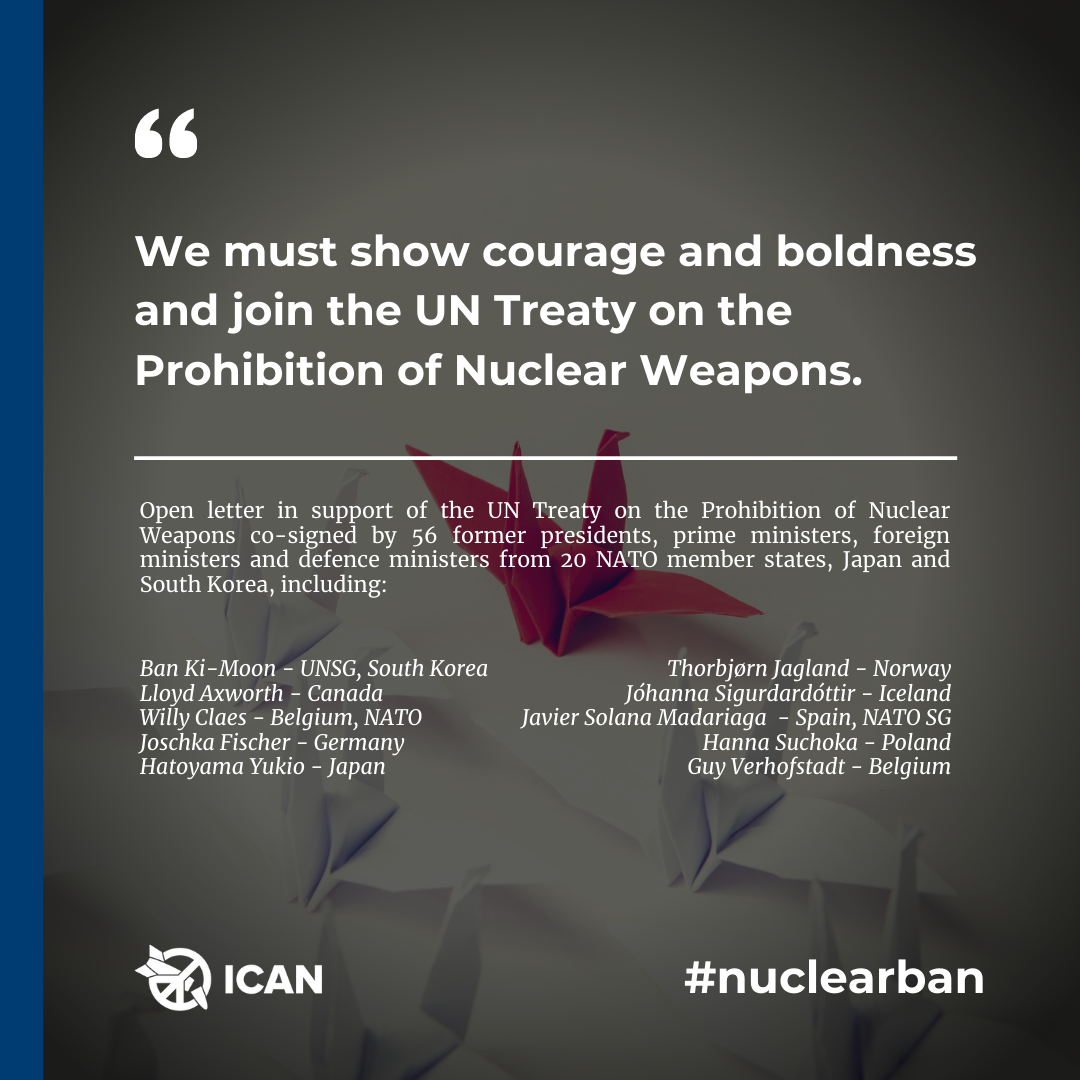 All of this has got the nuclear armed states and their allies rattled. Only a few days before the treaty reached the 50-state-milestone, AP exposed a letter from the Trump administration pressuring states parties and signatories to the treaty to withdraw their support. And on 15 December, NATO released a statement on the TPNW full of misleading statements and mistakes about the treaty. Read our takedown of that statement here.

Of course, these blatant attempt to undermine the TPNW did not stop the momentum of the majority of countries rallying together to eliminate nuclear weapons once and for all. On December 7th, the UN General Assembly adopted the annual resolution welcoming the treaty and its states parties with 130 nations in favour.

With everything we achieved in 2020, we can’t wait to see what’s possible next year! The treaty will enter into force on January 22nd 2021, and of course we’re all getting ready to celebrate it in style. All around the world, our campaigners are making plans to mark the date- and you can take a sneak peek at those first events - or even add your own - on our global day of action map.

After January, our work enters a new phase. Together with our 599 partners in 106 countries, we will have to build on our historic achievement by getting more countries on board, strengthening the stigma around these weapons of mass destruction in the countries that have or rely on them, and working together with a wide range of allies to flip the narrative around nuclear weapons - in the media, online and everywhere!

Will you be part of the movement making that happen? Join us