A new YouGov poll commissioned by the International Campaign to Abolish Nuclear Weapons (ICAN) has found a stark rejection of nuclear weapons in the four EU states which host US nuclear weapons on their soil: Belgium, Germany, Italy and the Netherlands. The Europeans who would be on the frontline for a potential nuclear attack strongly reject nuclear weapons and support their governments joining the Treaty on the Prohibition of Nuclear Weapons.

Concern has been mounting around the new nuclear arms race and Europe finds itself in the middle, just as it did during the Cold War. The US and Russia’s scrapping of the Intermediate-Range Nuclear Forces (INF) Treaty has led to heightened fears about the increasing risk of Europe becoming the likely battleground for nuclear war between the nuclear weapon states. When the INF officially terminates on August 2, there will be only one bilateral treaty on nuclear weapons arms control between nuclear powers: the New START treaty, which is itself seen to be under threat from the current US administration.

Here are some of the key takeaways from the poll:

#1 Europeans are strongly in favour of an international ban of all nuclear weapons worldwide. 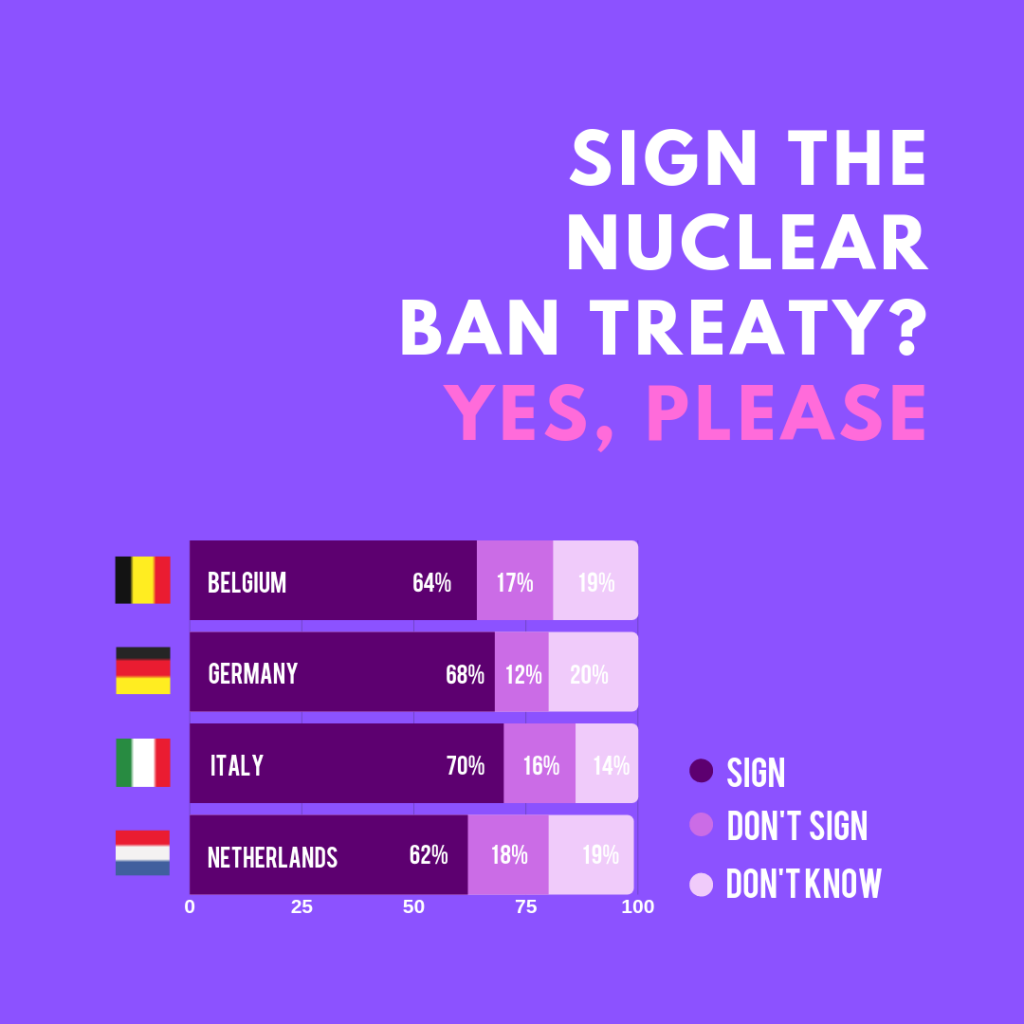 #2 In all four countries, the vast majority also opposes investments in nuclear weapons activities by companies in their country, confirming the public disapproval of those companies still profiting from the production of immoral, destructive, inhumane and indiscriminate weapons. And that disapproval is driving change: over the past year and a half, significant financial institutions all over the world – from Japan’s Resona holdings to Deutsche Bank and major pension funds in Norway, Sweden and the Netherlands – have mentioned domestic and international circumstances, even clearly referring to the TPNW, as reasons to change their investment practices around nuclear weapons. Find out more through: dontbankonthebomb.com 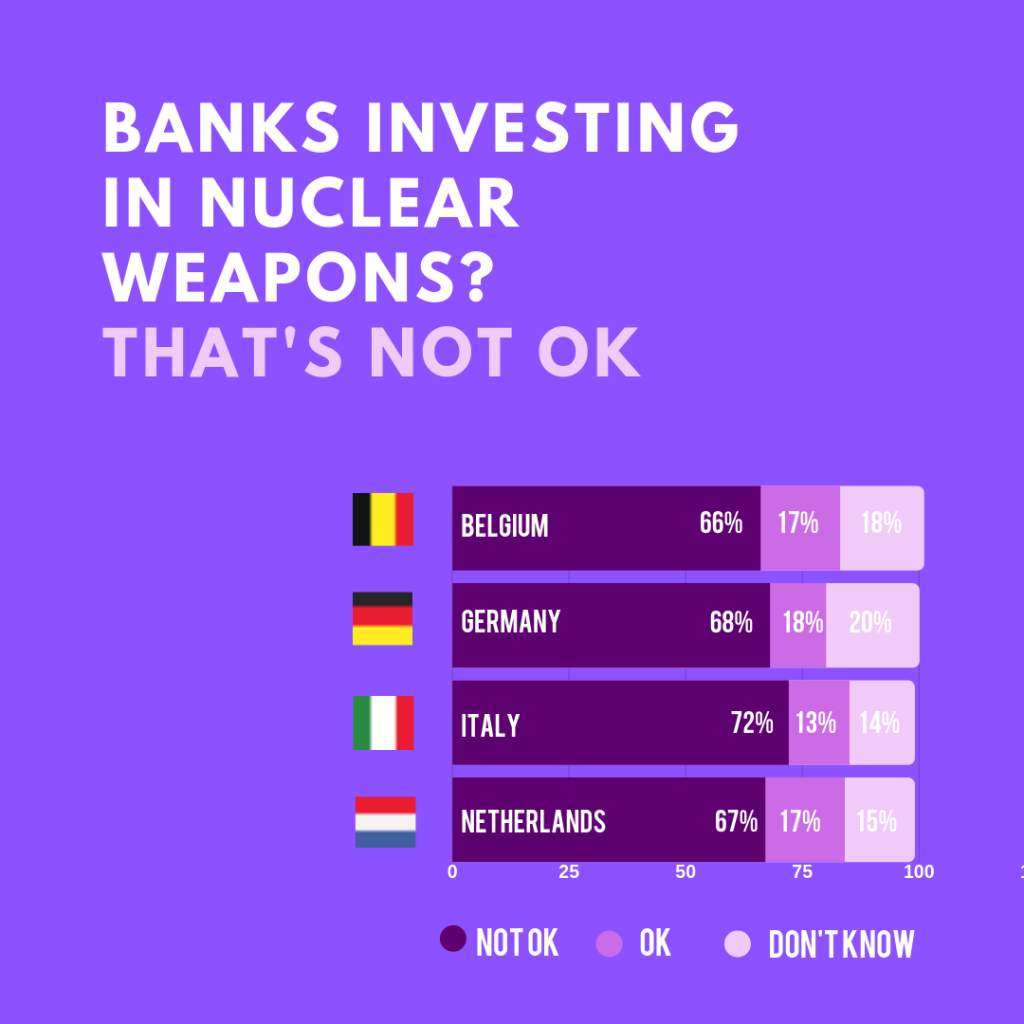 #3 Public opinion in all four surveyed host nations is strongly in favor of the removal of US nuclear weapons from their countries. 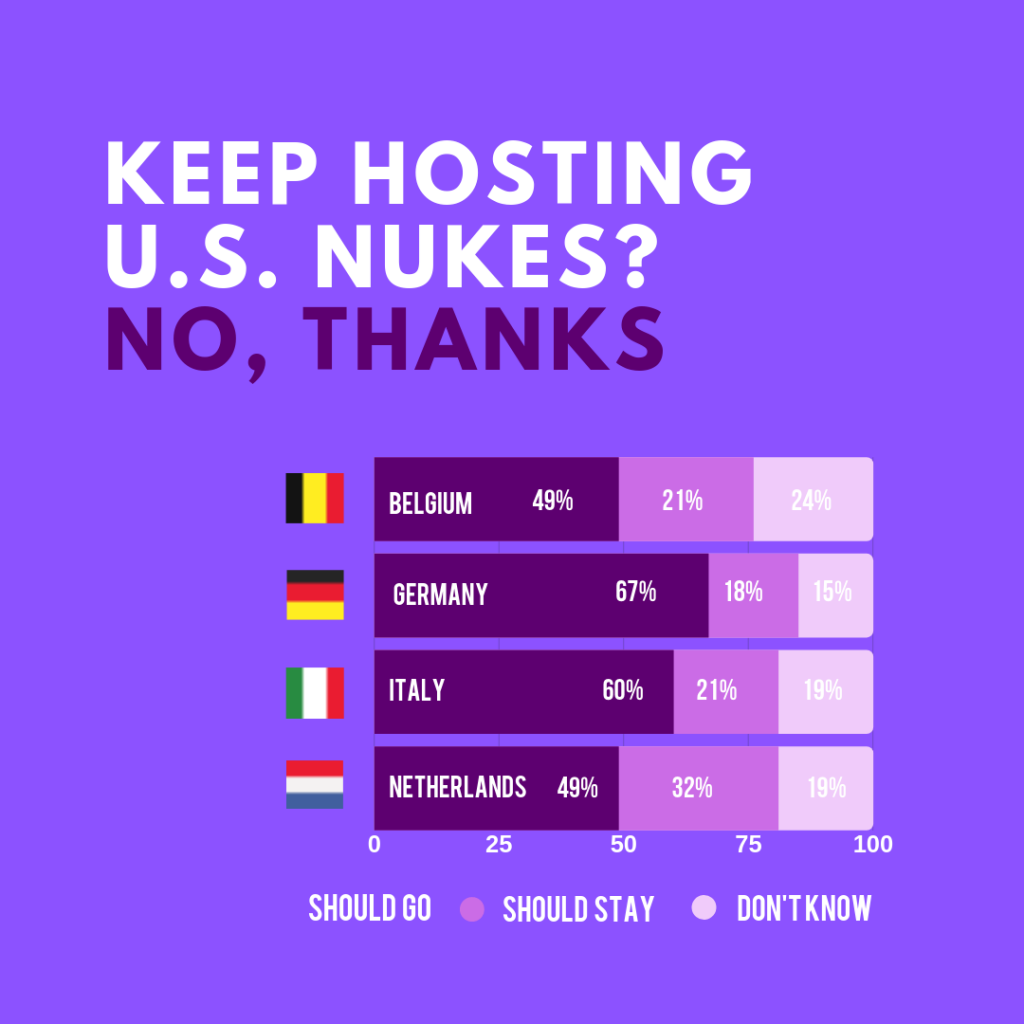 #4 As the four countries that currently host B61 gravity bombs and that maintain a dual-capable aircraft mission, the US’  B61 modernisation programme will also imply a large cost for the host countries. But public opinion in all four host nations also rejects the idea that new fighter jets should be equipped with a nuclear capacity. 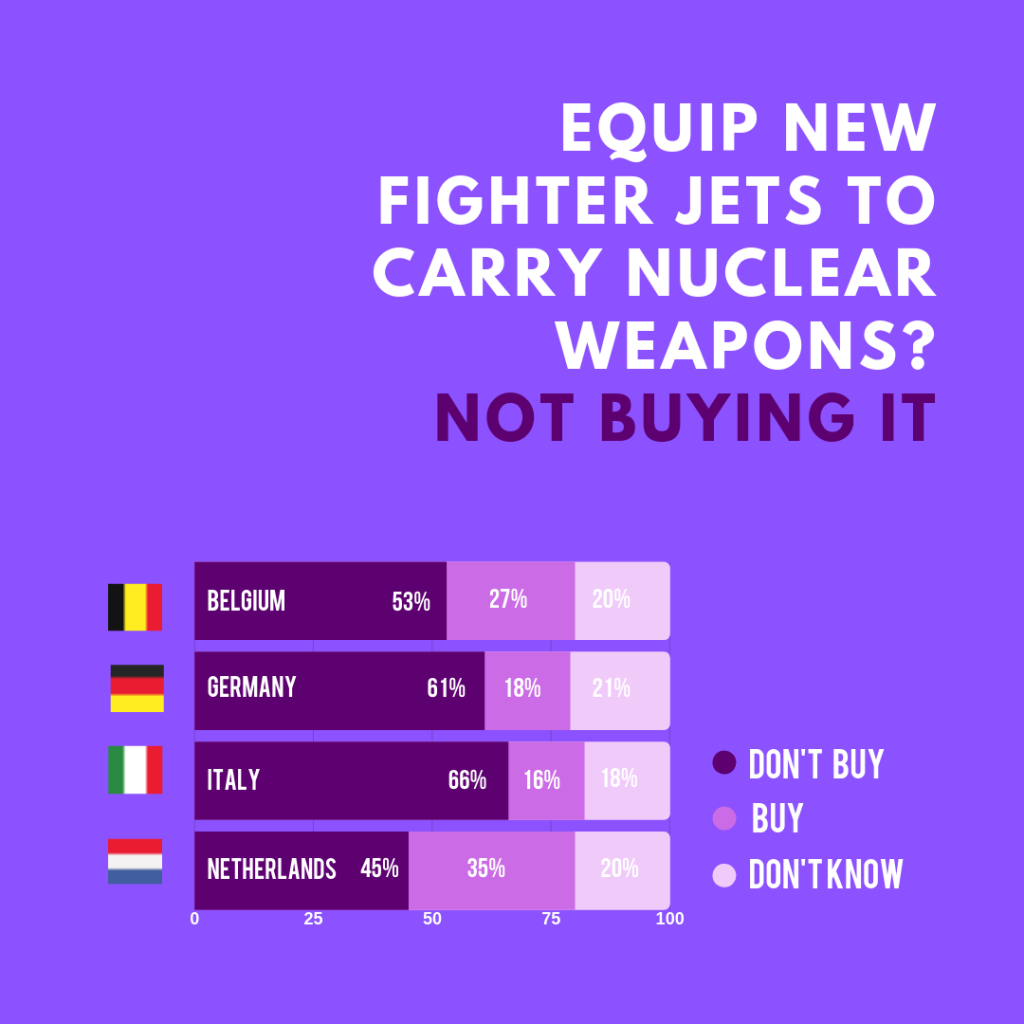 The poll results show a simple message: citizens in all four countries strongly oppose nuclear weapons, but it’s up to the governments to act.

In the Netherlands, debates about the role of the Netherlands in preparing to use nuclear weapons continue. While the Dutch government has recently reaffirmed its efforts as a bridge builder, citizens and members of parliament alike are seeking answers as to what direction those bridges are going? Since the only building we see is construction at the bunkers that hold US nuclear bombs. While the government is slower to react, there’s no surprise that the Dutch people don’t want their money connected to nuclear weapons- and a majority of banks and pension funds in the country are actively divesting. Just yesterday, ING reaffirmed that they too don’t want to expose their clients to nuclear weapons and they’re excited for next steps to prevent anyone, anywhere from financing nuclear weapon production.

The debate on buying a nuclear delivery system in the form of a new fighter jet is on hold while the government finds out what, other than the F35, the US is prepared to certify as a “dual-capable” aircraft for dropping nuclear bombs. The majority in favour of withdrawal of US nuclear weapons remains strong, as is support for the nuclear ban treaty. But the governing coalition (Conservative and Social Democrat) are having none of it and continue to resolutely oppose a ban, sticking rigidly to NATO lines on nuclear deterrence while at the same time calling for nuclear disarmament in the UN.

While nuclear armed states are forging ahead with plans to modernize and upgrade the lethality and “usability” of their nuclear arsenals, there is a growing public awareness in nuclear weapon states and nuclear umbrella states that waiting and hoping for national governments to change their position is not an option.

Inspired by the 70 nations who have signed the TPNW and the 23 who have ratified, support for the Treaty is inspiring action at the national and municipal level: more than 1200 active members of parliament across all continents have already pledged their support for the Treaty, and a growing number of cities have joined the ICAN Cities Appeal, including Washington DC, Munich, Sydney, Nagasaki and Hiroshima.

Methodology: The survey is based on online interviews with participants of the YouGov Panels in the four respective countries. The panellists are invited to the survey via an email with a link. The sample is drawn randomly from the base sample of the YouGov Panel as per specification of the particular study.

The members of the panel have agreed to take part in surveys. For inquiries email [email protected]