Support for the UN Treaty on the Prohibition of Nuclear Weapons (TPNW) keeps growing in the German Parliament. After 166 federal and over 200 regional parliamentarians pledged their support for the TPNW through the ICAN Parliamentary Appeal, a new cross-party working group for the abolition of nuclear weapons had their first meeting on Wednesday.

The “Parlamentskreis Atomwaffenverbot” arose because 25 Members of the Bundestag felt the need for a forum to bring together the many MPs who are working towards Germany signing the prohibition of nuclear weapons. While they may not have a majority in Parliament, 166 already sign the ICAN Parliamentary Appeal. Counting also the German parliamentarians at regional and EU level, 507 have signed the appeal as of now.

While the Government is still hesitant, at the federal, regional and European levels, German politicians are increasingly demanding that Berlin sign on to the Treaty. Three regional governments have recently endorsed this call, including the State of Rheinland-Pfalz, which currently hosts around 20 US nuclear weapons. The state prime minister Malu Dreyer, currently one of two acting Chairs of the SPD, took the initiative after Berlin and Bremen had already done so.

Beyond the three federal states, almost 50 cities have already signed on to the ICAN Cities Appeal, including Munich, Cologne, and the regional capitals of Potsdam, Wiesbaden, Mainz, Hannover, Schwerin and Düsseldorf.

Katja Keul, one of the group’s initiators and representative of the German Greens, said to TAZ-newspaper that “The long-term goal must be that Germany joins the nuclear weapons ban treaty.” While the co-initiators Ralf Kapschack and Kathrin Vogel are Social Democrats and from the Left Party respectively, the founding meeting was also attended by conservative law-makers, including Michael Zimmer.

Leo Hoffmann-Axthelm represented ICAN at the launch event in the German Bundestag, noting that “with the Government playing for time on nuclear disarmament, this kind of parliamentary initiative is crucial to create a debate about our reliance on weapons of mass destruction. We need to bring the government’s position closer to citizens, who overwhelmingly demand the prohibition of nuclear weapons and their withdrawal from Germany.”

Beatrice Fihn, Executive Director of ICAN welcomed the new initiative as a great example of elected officials standing up to end nuclear weapons.  “When the threat of nuclear use is increasing, we’re seeing parliamentarians across the world taking action to prohibit and eliminate nuclear weapons. ICAN looks forward to working with this group of German MPs to get the German government to sign the TPNW”

Going forward, the parliamentary intergroup expects to meet twice yearly, keep members updated about the ratification progress of the Treaty in other European states and putting in place the deliberative space and strategic thinking required to move Germany closer towards the signature of TPNW, inviting experts, activists, and increasing the pressure on the Foreign Minister to better justify the Government’s hesitance. 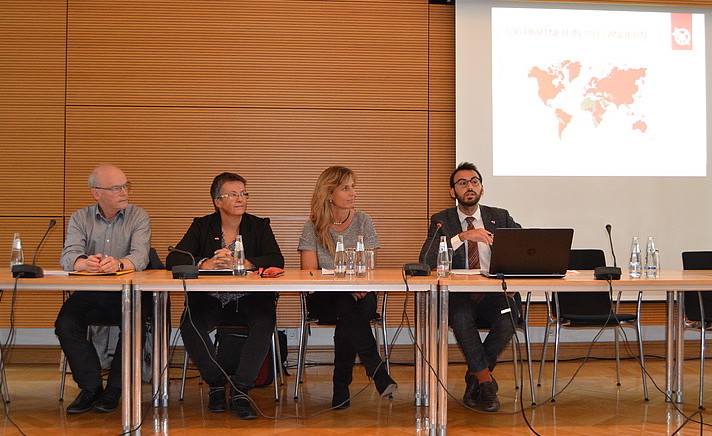 Deutsche Bank to stop banking on the bomb