As delegates gathered for this year’s UNGA First Committee under the exceptional and challenging circumstances of the global pandemic, most countries commitment to disarmament and the Treaty on the Prohibition of Nuclear Weapons (TPNW) held steady. From 6 October to 4 November 2020, the 75th session of the UNGA First Committee on Disarmament and International Security reconvened at the UN Headquarters in New York. However, the format of this year’s sessions was markedly different in response to the escalating health crisis. It adhered to strict COVID-19 sanitary related regulations, with limited in-person representation with no civil society present, virtual meetings of eDelegates and public webcasts.

While the logistics of the disarmament fora were unusual, delegates discussed and voted on resolutions on nuclear non-proliferation and disarmament, nuclear arms control, nuclear weapons treaties, spending and modernisation, risks, military doctrines and arms control, and the humanitarian and environmental impacts of their use, as usual.

A formidable majority of 118 states reaffirmed their support for the TPNW by voting for a resolution welcoming the treaty and calling for more states to join in many of their statements. Prior to the announcement of the 50th ratification of the TPNW, states parties to the treaty urged remaining states to ratify as soon as possible so it could enter into force and provide a legal framework to the total elimination of nuclear weapons. For example, Palestine encouraged states to join the TPNW as ‘[h]umanity has foolishly developed the instruments of its own extinction. It must get rid of them before it is too late.’ The Holy See advocated that the TPNW must also be ratified by nuclear states in which ‘it is imperative to continue encouraging, through concerted diplomatic activity, the participation of all Nuclear-Weapon-Possessing States in negotiations to establish ceilings, if not reductions, regarding their nuclear weapons.’ When the TPNW reached its 50th ratification half-way through meetings on the 25 October, many states celebrated it in their respective statements. 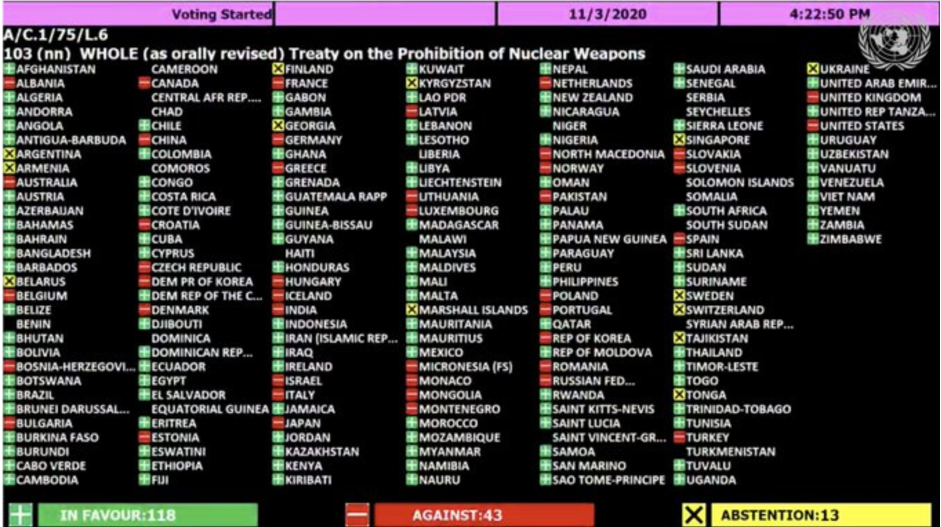 L.6 Vote Results on the Treaty on the Prohibition of Nuclear Weapons

From 2019, there were minimal technical changes to the resolution L.6 on the Treaty on the Prohibition of Nuclear Weapons, simply reflecting updated numbers of signatures and ratifications. OP3 now reads: ‘Welcomes that the Treaty will enter into force on 22 January 2021 and welcomes that already 84 States had signed the Treaty and 50 States had ratified or acceded to it as at 24 October 2020.’

In the First Committee vote of this annual resolution, 118 countries expressed their support leading to its adoption, while 43 rejected and 13 abstained the resolution. Separate votes were held on OP5 and OP6. OP5 calls upon “states in a position to do so to promote adherence to the Treaty through bilateral, subregional and multilateral contacts, outreach” and was voted 114-41-10. OP6 ‘requests that the Secretary-General, as depositary of the Treaty, to report to the General Assembly at its seventy-sixth session on the status of signature and ratification, acceptance, approval or accession of the Treaty’ with a voting result of 121-26-20. The General Assembly adopted the resolution with 130 voting for it, 42 against and 14 abstaining in its 7 December vote.

However, the fear of the TPNW entering into force by nuclear-armed states who continue nuclear spending, modernisation of their arsenals and inclusion in military and security doctrines, was clear at the First Committee. China, France, Russia, the United Kingdom and the United States delivered a joint Explanation Of Vote (EOV) on resolution L.6 ‘Treaty on the Prohibition of Nuclear Weapons’ to express their opposition to the TPNW (see Reaching Critical Will’s Monitor). China also provided an additional EOV, as well as other controversial voters such as Iran, Switzerland (abstained) and Argentina (abstained).

Meanwhile, Japan attempted to water down commitments to disarmament and non-proliferation in its annual resolution. Japan tabled resolution L.71 on ‘Joint courses of action and future-oriented dialogue towards a world without nuclear weapons’ which does not reference the TPNW and weakens references to the 2010 NPT Review Conference Action Plan outcomes. The resolution has been rightly critiqued as ‘an attempt to appeal to the US government’s declining commitments to disarmament’. This resolution, alongside US efforts to encourage others to withdraw from the TPNW, demonstrates the efforts of nuclear-armed and allied states to undermine the TPNW and disarmament commitments in a desperate attempt to retain their weapons.

Race and Public Opinion on Nuclear Weapons: Looking Beyond America