The government of Japan is still refusing to join the Treaty on the Prohibition of Nuclear Weapons (TPNW). Yet, the people of the country that experienced the bombings of Hiroshima and Nagasaki wish for their government to join the ban. Public opinion polls from mid-2020 to this January consistently show that a clear majority, 72% at its highest, believe that Japan should join the TPNW.

In a guest post for ICAN's website, Partner Organisation Peace Boat shares some insight into the current state of play around TPNW in Japan:

The government of Japan is still refusing to join the Treaty on the Prohibition of Nuclear Weapons (TPNW). Yet, the people of the country that experienced the bombings of Hiroshima and Nagasaki wish for their government to join the ban. Public opinion polls from mid-2020 to this January consistently show that a clear majority, 72% at its highest, believe that Japan should join the TPNW.

Representing the Japanese member cities of Mayors for Peace, the Mayors of Hiroshima and Nagasaki have been urging the government to sign and ratify the TPNW; or, should this not be possible before the first Meeting of States Parties (MSP) takes place, to at least take part in the meeting as an observer; The Governor of Hiroshima has also urged the same.

Civil society groups are pushing the government and parliamentarians for the same objective. These efforts are being collectively implemented by the Japan NGO Network for Nuclear Weapons Abolition, coordinated by ICAN International Steering Group member Peace Boat, Nihon Hidankyo, the national organization of Hibakusha, and others. 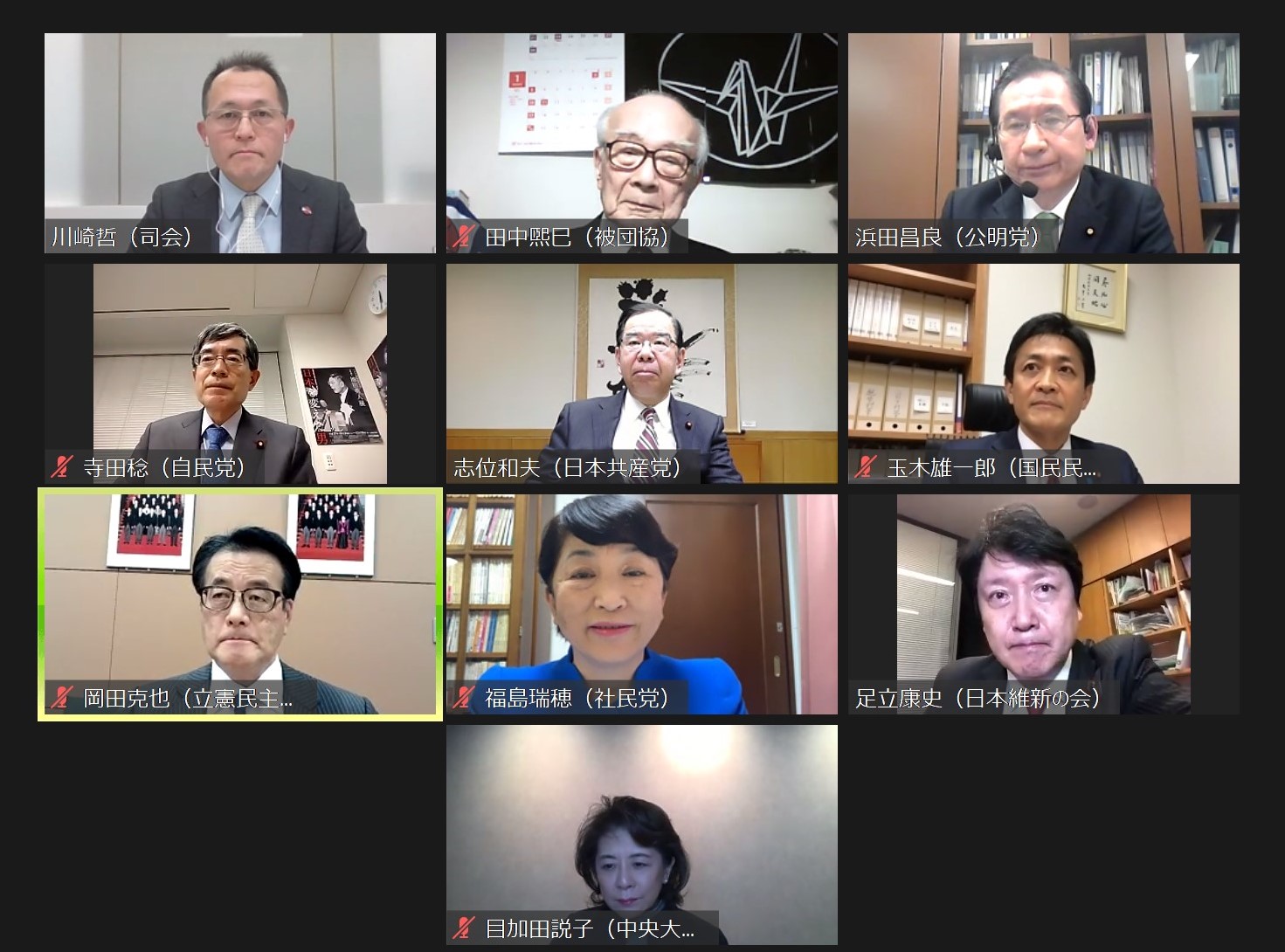 On February 4, 2021, over 20 members of the Japan NGO Network held a virtual meeting with senior officials of Japan’s Ministry of Foreign Affairs (MOFA). Parliamentary Vice-Minister for Foreign Affairs Kokuba Konosuke stated the usual stance of the government, that it “shares the goal of a nuclear-weapon-free world but takes a different approach.” Asked about the possibility of Japan joining the first MSP as an observer, MOFA Director of the Arms Control and Disarmament Division has said that the government is carefully considering the question, in view of the participating countries, agenda, and financial costs for participation.

The following week, on February 12, the Japan NGO Network hosted a virtual public debate, inviting representatives from all eight major Japanese political parties with seats in the Diet, both ruling and opposition. Kawasaki Akira from Peace Boat facilitated the meeting.

During the debate, opposition party representatives Shii Kazuo, chair of the Japanese Communist Party (JCP, with 25 seats of the total 700+ seats in the Upper and Lower Houses) and Fukushima Mizuho, leader of the Social Democratic Party of Japan (SDPJ, 2 seats) criticized the current Japanese policy that relies on nuclear deterrence and demanded the government joins the TPNW.

On the other hand, representatives of the ruling coalition – the Liberal Democratic Party (LDP, 387 seats) and Komeito (57 seats) - as well as the largest opposition party, the Constitutional Democratic Party of Japan (CDP, 152 seats), stated that US nuclear deterrence remains essential for the security of Japan and it is thus impossible for Japan to join the TPNW for the time being. Nonetheless each of the three made positive remarks about Japan joining the first MSP as an observer. Most notably, the ruling coalition member Komeito has formally requested the government to join the first MSP.

According to Giin Watch, a citizen-led Japanese website which illustrates Japanese parliamentarians’ stance toward the TPNW, only 26% of the over 700 Diet members have so far clearly expressed their support for the TPNW, demonstrating a sharp gap from public opinion.

The Giin Watch initiative is being led by university students, including from Hiroshima and Nagasaki. These students are knocking on the doors of parliamentarians who have not yet shown their stance clearly to the public, asking for meetings to discuss the issue. Their efforts have been reported widely in the Japanese media, particularly around January 22, the day TPNW entered into force. These efforts are also contributing to an increase in Japanese Diet members taking the ICAN Parliamentary Pledge. Giin Watch also shows that 30% of the 1,700 plus municipalities of Japan have adopted opinions in their local assemblies urging the Government of Japan to join the TPNW, and submitted these to Tokyo.

With these grassroots-led appeals from civil society, the question of whether to participate in the first MSP as an observer will remain as a high topic for political debate in Japan. Campaigners view the upcoming Lower House general election, set to take place sometime before or in this October, as a great opportunity to promote this debate.