Ahead of the NPT Review Conference in May 2020, the Red Cross and Red Crescent Movement have brought together experts and government representatives in Geneva to discuss the humanitarian consequences and the growing risks of nuclear weapons for a one-day expert meeting

“The aim of this meeting is in the interest of all us, namely, to have an open exchange on the latest findings from research and a strong interaction with the available expert network," explained Jagan Chapagain, Secretary General of the IFRC, during his opening remarks. He emphasised that "this continuous research is essential, because the catastrophic consequences of nuclear weapons affect not only governments, but each and every citizen of our interconnected world."

Following a summary of the three humanitarian impact conferences, the meeting of experts covered issues ranging from the emerging evidence on the immediate and longer-term humanitarian and environmental consequences of nuclear weapons, the drivers of nuclear weapons risks, and the measures that should be taken to avert nuclear catastrophe.

While nuclear reductions have been at a near standstill in recent years, there has been an emergence of a more disturbing trend: a new nuclear arms race, marked by the development of new types of nuclear weapons and an expansion of the role for nuclear weapons in warfighting, with low-yield “tactical” nuclear weapons.

Implications of emerging technologies on nuclear weapons include both an over-confidence in new systems and technologies and the threat of misinterpretation, for example cyber interference with a dual use system being interpreted as an attack on a nuclear system. There is no possible response capacity to a nuclear weapon attack, and we can’t even predict, let alone, manage all pathways to a nuclear use.

“No national government or international organization has the capacity to respond to the colossal humanitarian needs that the use of nuclear weapons would generate,” stressed Helen Durham, Director of International Law and Policy at the International Committee of the Red Cross, at the outset of the conference.

The harm of radiation has been largely underestimated, given that it is estimated based on the standard of an adult male, when the chance of getting cancer is much higher for young girls. Impacted communities themselves are trying to document the full consequences of nuclear weapons in their communities by distributing health surveys - more research is urgently needed in this domain, in conjunction with impacted communities. In recognition of the rising threat of nuclear weapons, UNIDIR researcher Wilfred Wan noted that the only way to eliminate risk is to eliminate nuclear weapons.

Also attending the meeting were government representatives from around 30 countries representing almost all global regions, which recalled the three “humanitarian impact conferences” from 2013 and 2014, which were groundbreaking in the nuclear weapons issue for their diverse geographic representation, in addition to the new evidence they presented.

Beatrice Fihn, Executive Director of ICAN, welcomed the meeting and appealed to the government representatives in the room to keep the humanitarian consequences front and centre in disarmament, particularly during this year’s NPT review : “We have seen a backslide in willingness by some states to talk about the humanitarian consequences of nuclear weapons use, while at the same time the likelihood of such scenario happening is increasing. Governments must centre their policies around protecting their populations through preventing the use of nuclear weapons and the UN Treaty on the Prohibition for Nuclear weapons provides the most effective way to do that.” She also recalled this year’s particular significance: “This is not a moment where we let our governments settle for less, this is where we demand more. This is the 75th anniversary of the atomic bombings of Hiroshima and Nagasaki. This is where we raise the voices of the survivors, and make sure the message comes across to the public.”

These findings will be summarised by the Red Cross and Red Crescent movement and published as a working paper to the NPT Review Conference. 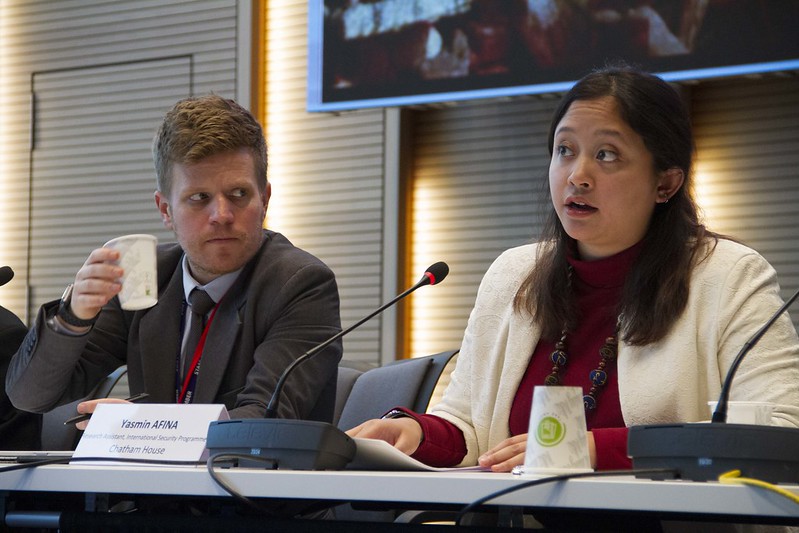