On Thursday, Belgian MPs will vote on a resolution proposing to remove US nuclear weapons stationed in the country, and join the UN Treaty on the Prohibition of Nuclear Weapons.

UPDATE 17/01: Despite a close-run vote, the resolution did not pass (74 against vs 66 in favour).  The close margin indicates how controversial the presence of US nuclear weapons on Belgian territory is to both citizens and the 66 elected representatives that voted in favour of removing those weapons and joining the UN #nuclearban treaty.

On Thursday 16 January, Belgian Parliament will vote on a resolution which proposes a step-by-step approach to removing US nuclear weapons stationed in the country, and calls for Belgium to join the UN Treaty on the Prohibition of Nuclear Weapons (TPNW). The resolution narrowly passed the foreign affairs committee and now faces a vote before the parliament in a plenary session.

Belgium is one of the five NATO states to host U.S. nuclear weapons as part of NATO's nuclear sharing agreement. The Belgian air force is assigned approximately 20 B61 nuclear bombs, which are deployed at Kleine Brogel Air Base. The hosting of these nuclear weapons has never been officially confirmed and the policy of the Belgian government has been to “neither confirm, nor deny” their presence on Belgian soil.

A public opinion poll conducted by YouGov in April 2019 found that 64 per cent of Belgians believe that their government should sign the treaty, with only 17 per cent opposed to signing.

The margin of the vote before the parliament is expected to be very thin, given the high stakes involved. While the resolution is not technically legally-binding on the government, pro-nuclear weapon interests are taking it very seriously, which is an indication of its importance.  The Belgian newspaper De Morgen reports that there has been pressure from the United States and NATO headquarters on the Belgian government to prevent the vote from succeeding. Parliamentarians are likely to be feeling the heat and urged to vote against the resolution and maintain Belgium’s position in support of nuclear weapons.

As a NATO state, Belgium has a special responsibility and opportunity to push back on this trend by rejecting a future with nuclear weapons. Belgium’s support for the TPNW would be a significant breakthrough, showing that it supports a future for the Alliance without nuclear weapons.  As several studies have acknowledged, there are no legal impediments for NATO states to join the TPNW. But there is significant political pressure within the Alliance - and particularly from the nuclear-armed states - to steer clear of the treaty, which is visible in some of the reactions to this vote playing out in Belgian media today. 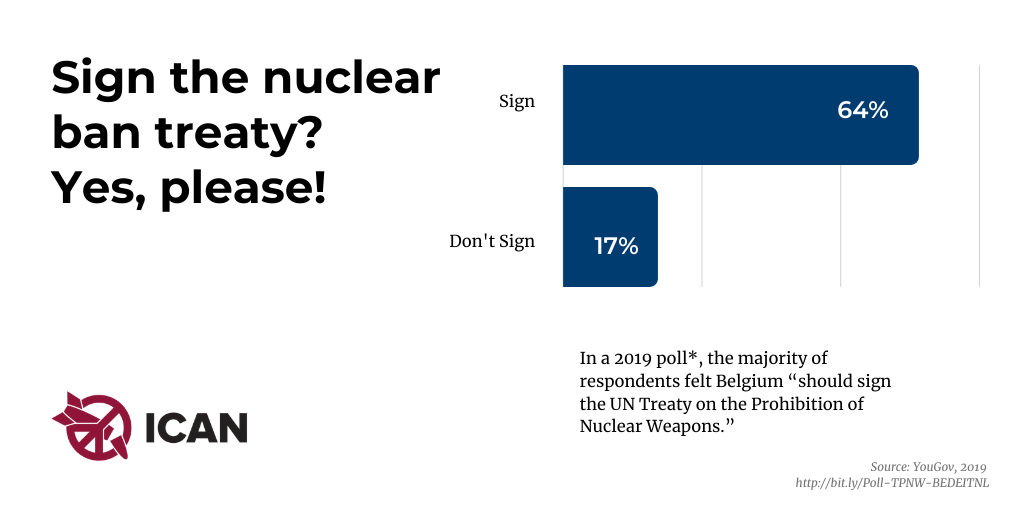