More than three-quarters of the Belgian population call for Belgium to join the UN Treaty on the Prohibition of Nuclear Weapons (TPNW) according to a new survey commissioned by ICAN. A strong majority want Belgium to take a lead among NATO member states in joining the treaty, even if faced with political pressure from the United States not to do so.

The results underscore that Belgium’s foreign ministry must follow the commitment in the government declaration to examine the TPNW in a positive light. Recent indications suggest that the ministry is intent on ignoring the declaration and trying to continue with business-as-usual.

Beatrice Fihn, Executive Director of ICAN, noted that the coming entry-into-force of the Treaty on the Prohibition of Nuclear Weapons (TPNW) is part of this rising tide against nuclear weapons. “More citizens are calling for change now, and more governments are answering that call by joining the TPNW. The pace of change will rapidly increase when the treaty comes into force early next year,” Ms. Fihn said.

The survey, conducted by YouGov, noted: 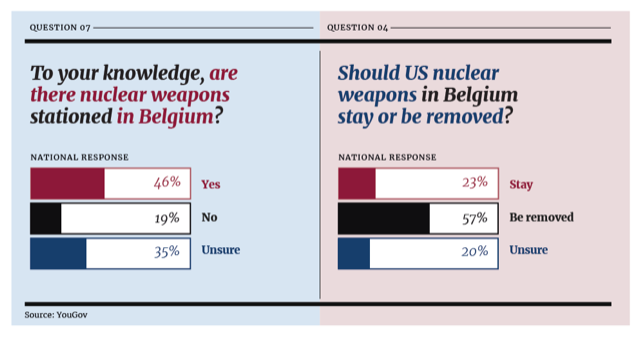 The survey was carried out by YouGov from Nov. 23-27, 2020 with a panel of over 1000 Belgians. ICAN and its Belgian partner organisations commissioned the survey. Olivier Galand of the Belgian Coalition against Nuclear Weapons said, “With a growing number of people supporting a prohibition on nuclear weapons this polling shows that the Belgian nuclear policy needs to drastically change course. The Belgian Ministry for Foreign Affairs must therefore take the will of the Belgian people into consideration when it examines the TPNW, as is required by the government declaration.”

The results also show that the majority of those surveyed did not know that Belgium hosts U.S. nuclear weapons at Kleine Brogel military base. When informed they demanded that the weapons be removed.

According to Fihn, “These realities align with what we see globally: governments depend on a silent and uniformed population to continue their inhumane and reckless nuclear weapons policies. People demand change once they become aware of violation against international law being carried out in their name.”