Algeria has signed but not yet ratified the Treaty on the Prohibition of Nuclear Weapons. It participated in the negotiation of the treaty at the United Nations in New York in 2017 and voted in favour of its adoption.

From 1961 to 1967, France conducted 17 nuclear test explosions in Algeria, leaving a legacy of environmental devastation and health problems.

Abdelkader Messahel, the then-minister for foreign affairs of Algeria, signed the treaty when it opened for signature on 20 September 2017.

In October 2020, Sabri Boukadoum, the minister of foreign affairs, “reiterate[d] our intention to ratify [the treaty] in the very short coming time”. 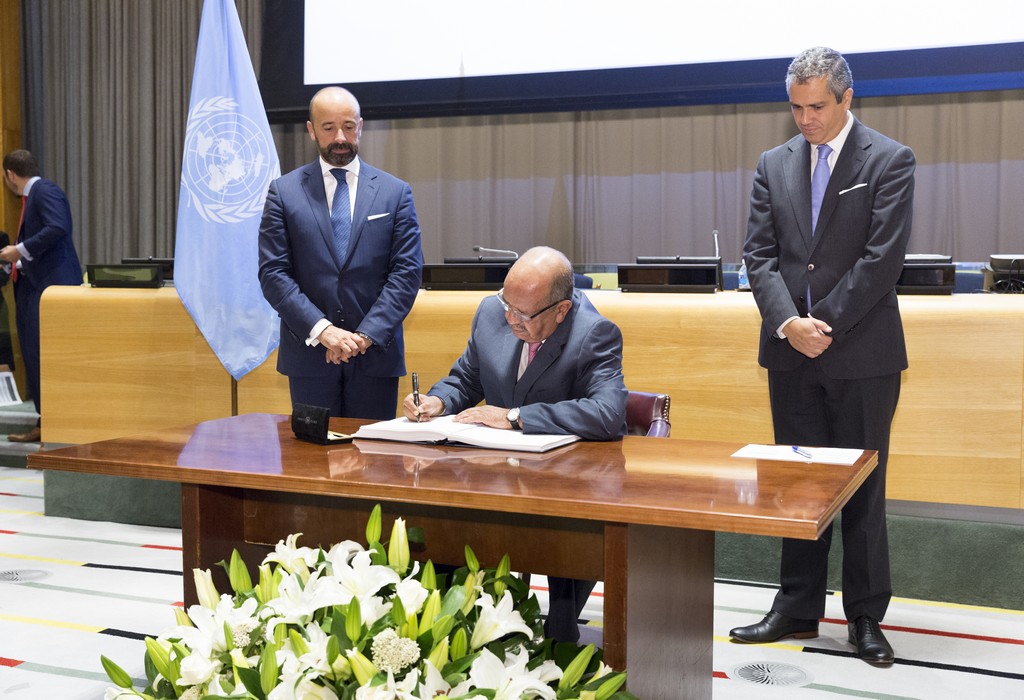 Abdelkader Messahel, the then-minister for foreign affairs of Algeria, signs the treaty at a high-level ceremony in New York on 20 September 2017.

Algeria has promoted universal adherence to the treaty, including by co-sponsoring a UN General Assembly resolution in 2019 that called upon all states to sign, ratify, or accede to the treaty “at the earliest possible date”. It has described the treaty as “a significant asset conducive to the total elimination of nuclear weapons”.

In its opening statement to the negotiating conference for the treaty in 2017, Algeria said that this initiative is “the result of the dedication of all those who are convinced that we have to do something” and “do not want to continue betting on the unbearable risk of annihilating all humanity”.

In 2016, Algeria voted in favour of the UN General Assembly resolution that established the formal mandate for states to commence the negotiations in 2017 on “a legally binding instrument to prohibit nuclear weapons, leading towards their total elimination”.

Algeria was among 127 states that endorsed a “humanitarian pledge” in 2015–16 to cooperate “in efforts to stigmatise, prohibit, and eliminate nuclear weapons”. The pledge was instrumental in building momentum and support for convening the negotiations.

Algeria is a state party to the 1996 Treaty of Pelindaba, which established Africa as a nuclear-weapon-free zone.

There are currently no elected representatives or local or regional bodies in Afghanistan committed to supporting the TPNW through the ICAN Cities Appeal and Parliamentary Pledge. Find out what you can do to support the TPNW in Andorra.