Comoros has signed but not yet ratified the Treaty on the Prohibition of Nuclear Weapons. It did not formally participate in the negotiation of the treaty at the United Nations in New York in 2017 and thus did not vote on its adoption.

Azali Assoumali, the president of Comoros, signed the treaty on 20 September 2017. He said that Comoros joined other members of the international community in calling on nuclear-armed states “to abandon their nuclear weapons programmes”. In October 2020, he described the treaty as “an important step towards the common goal of a world without nuclear weapons”.

In a statement to the United Nations in October 2019, Comoros said that the treaty “plays an important role in strengthening global standards against the use, proliferation, and possession of nuclear weapons by any state”. 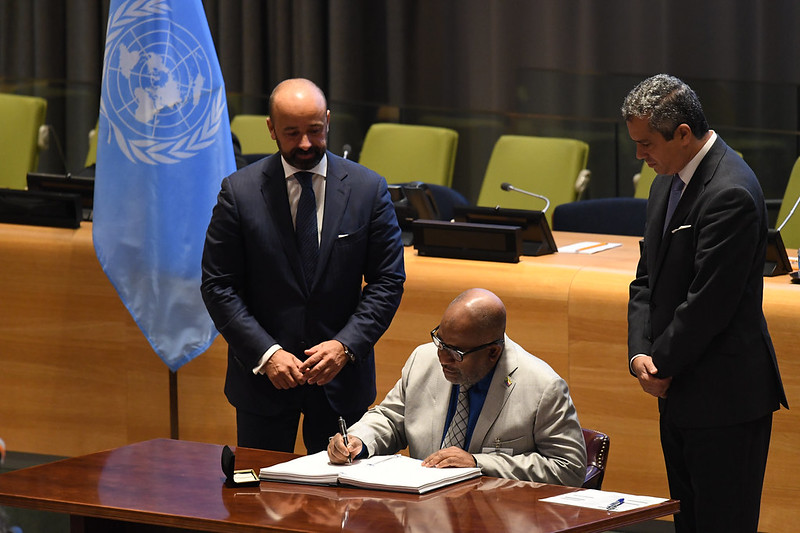 Comoros voted in favour of a UN General Assembly resolution in 2019 that welcomed the adoption of the treaty and called upon “all states that have not yet done so to sign, ratify, accept, approve, or accede to the treaty at the earliest possible date”.

In 2016, Comoros voted in favour of the UN General Assembly resolution that established the formal mandate for states to commence the negotiations in 2017 on “a legally binding instrument to prohibit nuclear weapons, leading towards their total elimination”. However, it later informed the UN secretariat that it had intended to abstain from voting.

Comoros was among 127 states that endorsed a “humanitarian pledge” in 2015–16 to cooperate “in efforts to stigmatise, prohibit, and eliminate nuclear weapons”. The pledge was instrumental in building momentum and support for convening the negotiations.

Comoros is a state party to the 1996 Treaty of Pelindaba, which established Africa as a nuclear-weapon-free zone.