Botswana has signed and ratified the Treaty on the Prohibition of Nuclear Weapons. It participated in the negotiation of the treaty at the United Nations in New York in 2017 and voted in favour of its adoption.

Unity Dow, the minister for foreign affairs and international cooperation of Botswana, signed the treaty at a high-level ceremony on 26 September 2019. The country’s instrument of ratification was deposited with the UN secretary-general on 15 July 2020. 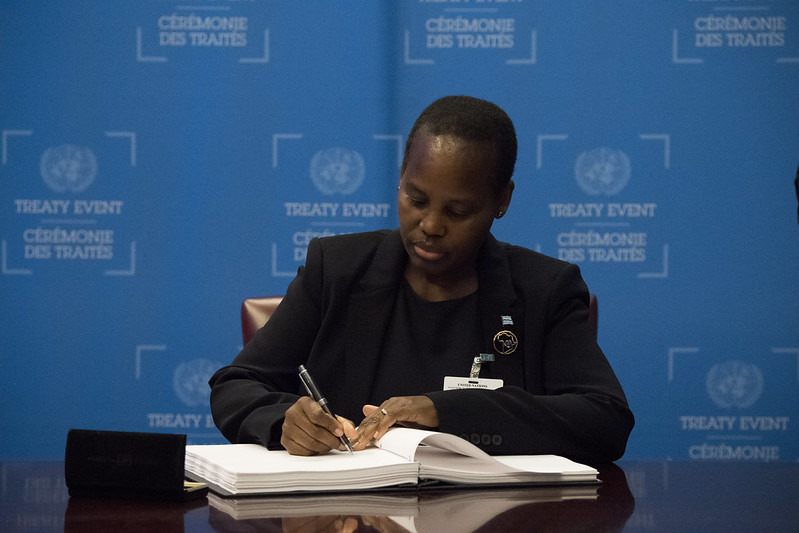 Unity Dow, the minister for foreign affairs and international cooperation of Botswana, signs the treaty at a high-level ceremony on 26 September 2019.

Botswana’s ratification coincided with the 11th anniversary of the entry into force of the Treaty of Pelindaba, a regional treaty establishing the African continent as a nuclear-weapon-free zone.

“In concluding this milestone step,” said Collen Vixen Kelapile, Botswana’s permanent representative to the United Nations, “Botswana has once again reconfirmed its unwavering commitment to global peace and security through prohibition of nuclear weapons as a concrete means towards full implementation of the disarmament agenda.”

He said that Botswana took pride in being counted among the earliest states parties to the treaty and encouraged “all other peace-loving nations to collectively join hands and contribute to this noble endeavour for the prohibition of all nuclear weapons”.

Botswana has promoted universal adherence to the treaty, including by co-sponsoring a UN General Assembly resolution in 2019 that called upon all states to sign, ratify, or accede to the treaty “at the earliest possible date”.

In a statement to the United Nations in October 2019, Botswana underscored “the significant role of the [treaty in] strengthening the global norms and practices against the use, proliferation, and possession of nuclear weapons by any country”.

In 2016, Botswana voted in favour of the UN General Assembly resolution that established the formal mandate for states to commence the negotiations in 2017 on “a legally binding instrument to prohibit nuclear weapons, leading towards their total elimination”.

Botswana was among 127 states that endorsed a “humanitarian pledge” in 2015–16 to cooperate “in efforts to stigmatise, prohibit, and eliminate nuclear weapons”. The pledge was instrumental in building momentum and support for convening the negotiations.

Botswana is a state party to the 1996 Treaty of Pelindaba, which established Africa as a nuclear-weapon-free zone.