The Treaty on the Prohibition of Nuclear Weapons (TPNW) opened for signature in New York on 20 September 2017 and will enter into force once 50 states have ratified or acceded to it. This guide is designed to assist campaigners in promoting the signature and ratification of the TPNW.

Does your country support the TPNW?

To check whether your country has already signed, ratified or acceded to the TPNW, see the list of signatories and states parties on the ICAN website.

Several states have signed the TPNW but not yet ratified it.

The process of ratification differs from one country to another. Usually it involves a review of the treaty by relevant government departments (e.g., the foreign ministry, defence ministry and attorney-general’s office) and approval by the legislature. The judiciary might also assess whether the treaty is consistent with the national constitution. However, in some countries, ratification is more straightforward, involving only the executive.

To complete its ratification process, a state must submit an “instrument of ratification” to the UN Secretary-General. This is a formal document signed by the head of state, head of government or foreign minister declaring that the state consents to be legally bound by the treaty. It is deposited once all domestic processes have been completed. The UN Office of Legal Affairs has provided sample text for such an instrument.

By ratifying the TPNW promptly, your country can contribute to the treaty’s timely entry into force. For most countries that do not possess nuclear weapons, ratification is a straightforward process, as they have already made a legal undertaking under the Non-Proliferation Treaty never to acquire such weapons. Many countries have also supported a prohibition on nuclear weapons at a regional level by joining a nuclear-weapon-free zone. 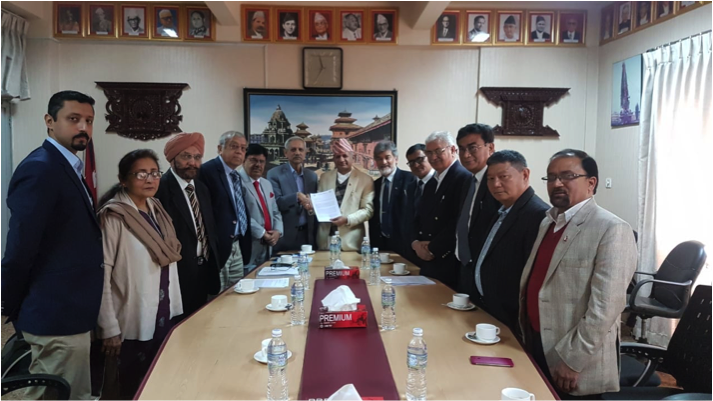 Photo: In April 2019, representatives of the International Physicians for the Prevention of Nuclear War, an ICAN partner organization, met with senior officials in Kathmandu, including the foreign minister, to promote Nepal’s ratification of the TPNW.

What is the ratification process in your country?

For some countries, information about ratification processes can be readily found online. See this useful guide. For others, you may need to ask an official at the foreign ministry to explain the process. He or she should also be able to advise whether steps have already been taken towards ratification. An official from the parliament might also be able to update you on progress and advise of avenues for civil society input.

Possible actions to encourage your country to ratify

The TPNW can be signed in New York at any time. Signature is largely a symbolic act and does not constitute formal consent by the state to be legally bound by the treaty. Many leaders opt to sign treaties during the high-level opening of the UN General Assembly (known as “leaders’ week”), which is held each September.

A head of state (e.g., president), head of government (e.g., prime minister), or foreign minister is automatically empowered to sign the TPNW on behalf of his or her state. Moreover, any one of these individuals may vest that power in another individual (e.g., the state’s permanent representative to the United Nations or a deputy minister). 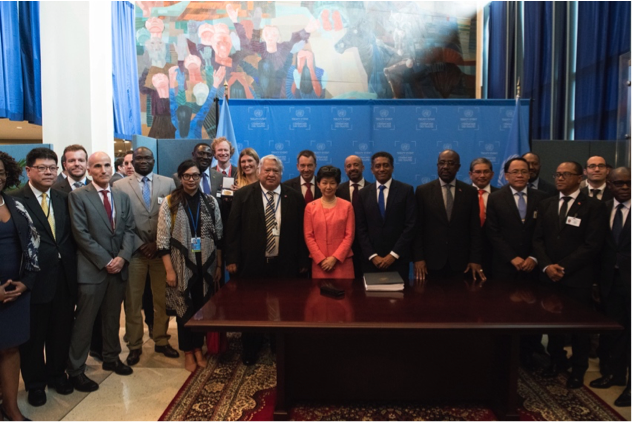 Photo: At a high-level ceremony at the UN headquarters in September 2018, nine new states signed the TPNW and four ratified it. The president of the UN General Assembly, among other dignitaries, spoke at the event.

A decision to sign a treaty is typically taken by the executive branch of government. But the precise process for approving signature will differ from one country to another. In many countries, the foreign ministry will review the treaty and the foreign minister will make a recommendation to the cabinet on whether to proceed with signature. The signature process is usually much simpler and less onerous than the process for ratification. 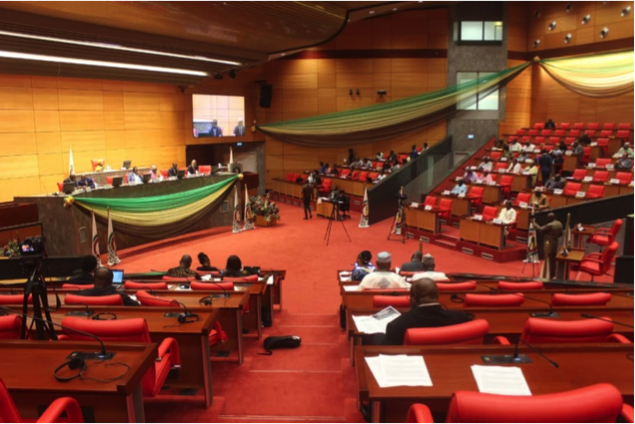 Photo: In May 2019, ICAN campaigners from Ghana, Nigeria and Togo addressed the parliament of the Economic Community of West African States to promote signature and ratification of the TPNW.

In countries that have not yet expressed support for the TPNW, different campaign strategies will need to be employed to build political will and a broad constituency in favour of the treaty. Here are some possible actions to consider: 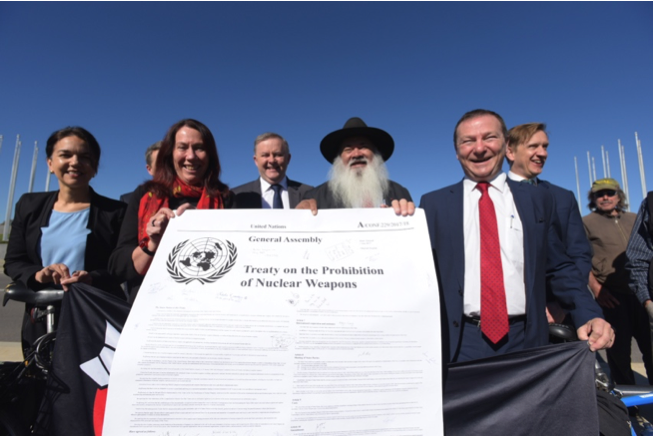 Photo: Parliamentarians in Australia show their support for the TPNW at an event in September 2018 organized by ICAN to mark the first anniversary of the treaty’s opening for signature.

There are many actions that states that have already ratified or acceded to the TPNW can take to encourage other states to become parties. For example: 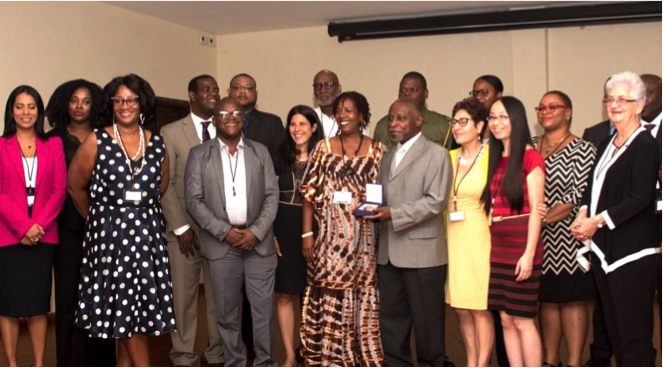 Photo: The government of Guyana, in partnership with ICAN, hosted a regional forum in June 2019 to promote signature and ratification of the TPNW by Caribbean states. Guyana was among the first states to become a party to the treaty in September 2017. 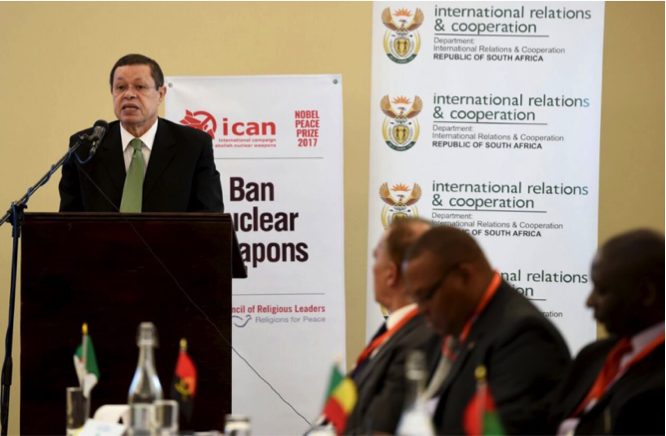 Photo: In August 2018, the South African foreign ministry and ICAN co-hosted a regional conference in Pretoria with delegates from 20 African states to promote signature and ratification of the TPNW across the region.

If your government has specific concerns or questions relating to the application of the TPNW or seeks further assistance with their process, the ICAN staff team would be pleased to supply relevant briefing materials and tailored advice. Contact: [email protected]

This material was made with the support of:

Companies are involved in producing, manufacturing, and developing nuclear weapons. These companies should get out... Read more

Nuclear weapons are the most destructive, inhumane and indiscriminate weapons ever created. A single nuclear... Read more

The ongoing humanitarian and environmental impacts resulting from the legacies of past nuclear weapons use... Read more

The first Meeting of States Parties (1MSP) of the Treaty on the Prohibition of Nuclear... Read more

Following the adoption of the Treaty on the Prohibition of Nuclear Weapons (TPNW) in 2017... Read more

Observing the 1MSP for governments

The first meeting of states parties (“1MSP”) to the Treaty on the Prohibition of Nuclear... Read more

A checklist of steps states parties can take to implement the Treaty on the Prohibition... Read more

Want to use a graphic you’ve seen on ICAN’s social media accounts, but need to... Read more

A briefing paper on NATO and the Treaty on the Prohibition of Nuclear Weapons. December... Read more

ICAN Law School is in session!

On 28 October, ICAN kicked off its “Instagram Law School” welcoming friends of the campaign... Read more

A briefing paper on the legal and political significance of the entry into force of... Read more

Recording of the ICAN global zoom call on 17 September 2020. Open to all partner... Read more

Campaigning Resources for the 75th Anniversary

The 75th Anniversary of the atomic bombings of Hiroshima (Aug 6) and Nagasaki (Aug 9)... Read more

The imminent entry-into-force of the United Nations’ Treaty on the Prohibition of Nuclear Weapons (TPNW)... Read more

Given the clear relationship between nuclear weapons and gender, nuclear disarmament must be raised in conversations about... Read more

The TPNW and the SDGs

The catastrophic humanitarian consequences of any use of nuclear weapons (by intent, accident or miscalculation) anywhere... Read more

The Catholic Church has been a leading proponent of the Treaty on the Prohibition of... Read more

The TPNW and Silencing the Guns

“Silencing the guns: creating conducive conditions for Africa’s development” is the theme of the African... Read more

The Treaty on the Prohibition of Nuclear Weapons (TPNW) opened for signature in New York... Read more

As an ICAN partner, you can use the ICAN Partner logo to indicate that... Read more

African Support for the TPNW

This briefing paper (October 2019) shows how African countries are leading the way towards entry... Read more

Advancing the TPNW - The Role of CARICOM

Member states of the Caribbean Community (CARICOM) played a leading role in the negotiation and... Read more

The document will load below, or you can download it now from the following links: English... Read more

In March of 2017, Religions for Peace and ICAN produced the Nuclear Ban Treaty Negotiation... Read more

Please note, this pocket guide is from 2016.  You will find more up-to-date information on... Read more

In 2014, ICAN released this campaigners kit with the intention of providing campaigners with a toolbox... Read more

This series of essays features African leaders and campaigners with their perspective on Africa’s relationship... Read more

This publication explains the impact of nuclear weapons in the Pacific Islands and the role... Read more