The United Kingdom’s nuclear weapons would be launched from its nuclear-capable submarines which are based off the coast of Scotland at Her Majesty’s Naval Base. One submarine is usually on patrol.

The United Kingdom tested 45 nuclear weapons from 1952-1991. From 1952 to 1963, the British government conducted 12 nuclear test explosions and up to 600 so-called “minor trials” in the South Australian desert and off the Western Australian coast. Between 1957 and 1962, the United Kingdom and the United States tested 33 nuclear weapons at Malden and Kiritimati islands in Kiribati.

The United Kingdom did not participate in the negotiations of the Treaty on the Prohibition of Nuclear Weapons and has not yet signed or ratified it.

A public opinion poll conducted by YouGov in March 2017 found that 75 per cent of British people believed that their government should participate in the treaty negotiations, with 9 per cent opposed to participating and 16 per cent undecided.

The leader of the opposition Labour Party, Jeremy Corbyn, said in August 2017 that, with the recent adoption of the treaty by a majority of the world’s governments, “historic progress” was made towards “a world that genuinely meets the security needs of its people”.

The United Kingdom voted against a UN General Assembly resolution in 2019 that welcomed the adoption of the treaty and called upon “all states that have not yet done so to sign, ratify, accept, approve, or accede to the treaty at the earliest possible date”.

On the opening day of the TPNW negotiating conference in 2017, it joined the United States and several other states in protesting the treaty-making process.

In 2016, the United Kingdom voted against the UN General Assembly resolution that established the formal mandate for states to commence the negotiations in 2017 on “a legally binding instrument to prohibit nuclear weapons, leading towards their total elimination”.

The United Kingdom actively discouraged other states, in particular its former colonies, from supporting the resolution. 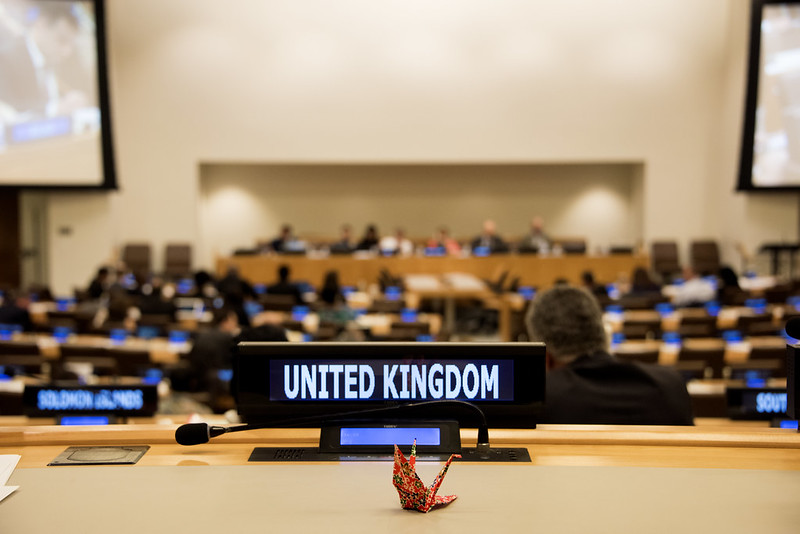 These cities, towns and provinces support the TPNW