In September 2018, some unexpected good news came out of Spain: in exchange for their support on the 2019 budget, political party Podemos obtained a commitment from the Spanish government to sign the UN Treaty on the Prohibition of Nuclear Weapons (TPNW). The government has not yet announced how and when they will implement this decision.

The Spanish government struck a deal with Podemos

The commitment came during a one-to-one meeting between Spanish President Pedro Sanchez and Podemos party leader Pablo Iglesias on September 7th to discuss the 2019 budget. Afterwards, Podemos published the 11 commitments by the government on a variety of subjects established during the meeting. Sandwiched between the creation of a State Memorial museum to honour victims of the Franco regime and a new loan system to help poor families pay for school books, sat commitment #4: Spain will sign the Treaty on the Prohibition of nuclear weapons. 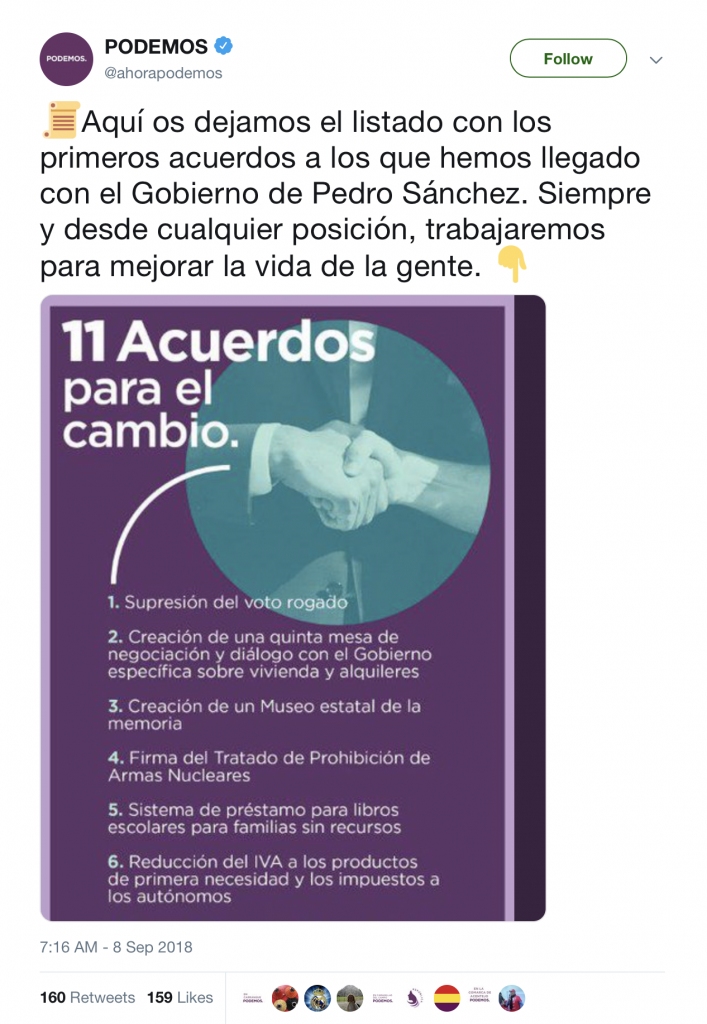 What is the significance of Spain signing the Nuclear Ban Treaty?

Spain’s signature would represent a significant breakthrough for the TPNW among NATO states. Spain would be indicating that it supports a future for the Alliance without nuclear weapons. As several studies have acknowledged, there are no legal impediments for NATO states to join the TPNW. But there is significant political pressure within the Alliance to steer clear of the treaty.

Spain’s support for the TPNW would also be a significant positive signal for the wider nuclear disarmament and non-proliferation machinery which is being undermined significantly by the nuclear-armed states. Established agreements, treaties and obligations are being thrown out the window, while all nine of the nuclear-armed states are embarking upon costly modernisation programmes. The United States’ recent decision to withdraw from the INF Treaty is just one example of this reckless behaviour. NATO members, like Spain, have a special responsibility and opportunity to push back on this trend by rejecting a future with nuclear weapons. Many will be watching the Spanish government’s next move.

During a meeting in Madrid in early November, Podemos representatives confirmed to ICAN that the commitment was very much in place, and they expect the government to abide by it. But the government has given no indication of how or when they would sign the treaty to date and requests for comment to the government by media outlets have gone unanswered.

ICAN is calling on the government to stick to its agreement in September and explore the next steps needed for Spain to sign the TPNW.

Read the article in Spanish.

Thanks to our partner Pressenza, this post is also available in: French, Italian, German, Catalan, and Greek