Mexico has signed and ratified the Treaty on the Prohibition of Nuclear Weapons.

Luis Videgaray Caso, the then-secretary of foreign affairs of Mexico, signed the treaty on 20 September 2017. Miguel Ruíz Cabañas, the assistant secretary for multilateral affairs and human rights, deposited the country’s instrument of ratification with the UN secretary-general on 16 January 2018.

Mexico participated in the negotiation of the treaty at the United Nations in New York in 2017 and voted in favour of its adoption.

In an address to the United Nations following the signing ceremony in September 2017, Videgaray said that Mexico had signed the treaty because “the existence of nuclear weapons poses a threat to the whole of humanity”.

The Mexican senate gave its unanimous approval for ratification in November 2017.

Mexico has promoted universal adherence to the treaty, including by co-sponsoring a UN General Assembly resolution in 2019 that calls upon all states to sign, ratify, or accede to the treaty “at the earliest possible date”.

In a statement to the United Nations in September 2019, Mexico encouraged all states that have not yet ratified the treaty “to speed up their respective processes”.

In its opening statement to the negotiating conference, Mexico described the treaty as “a global extension of the various treaties that establish zones free of nuclear weapons” and expressed hope that “the collective will of the international community” convinces nuclear-armed states, in the near future, to adhere to the treaty.

Mexico, Austria, Brazil, Ireland, Nigeria, and South Africa comprised a “core group” of states that played a leading role in bringing the negotiations about and ensuring their ultimate success.

In 2016, Mexico was an initiator and co-sponsor of the UN General Assembly resolution that established the formal mandate for states to commence the negotiations in 2017 on “a legally binding instrument to prohibit nuclear weapons, leading towards their total elimination”.

Mexico was among 127 states that endorsed a “humanitarian pledge” in 2015–16 to cooperate “in efforts to stigmatise, prohibit, and eliminate nuclear weapons”. The pledge was instrumental in building momentum and support for convening the negotiations.

In 2014, Mexico hosted the second in a series of inter-governmental conferences on the “humanitarian impact of nuclear weapons”, in the state of Nayarit. The Mexican chair of the conference, Juan Gómez Robledo, concluded that a diplomatic process must be launched for the prohibition of nuclear weapons.

The Nayarit conference helped cement the idea that the prohibition of nuclear weapons is a necessary precondition for their elimination, based on experience with other types of indiscriminate weapons. It was hailed as “a point of no return” in the process to outlaw nuclear weapons.

Mexico is a state party to the 1967 Treaty of Tlatelolco, which established Latin America and the Caribbean as a nuclear-weapon-free zone. 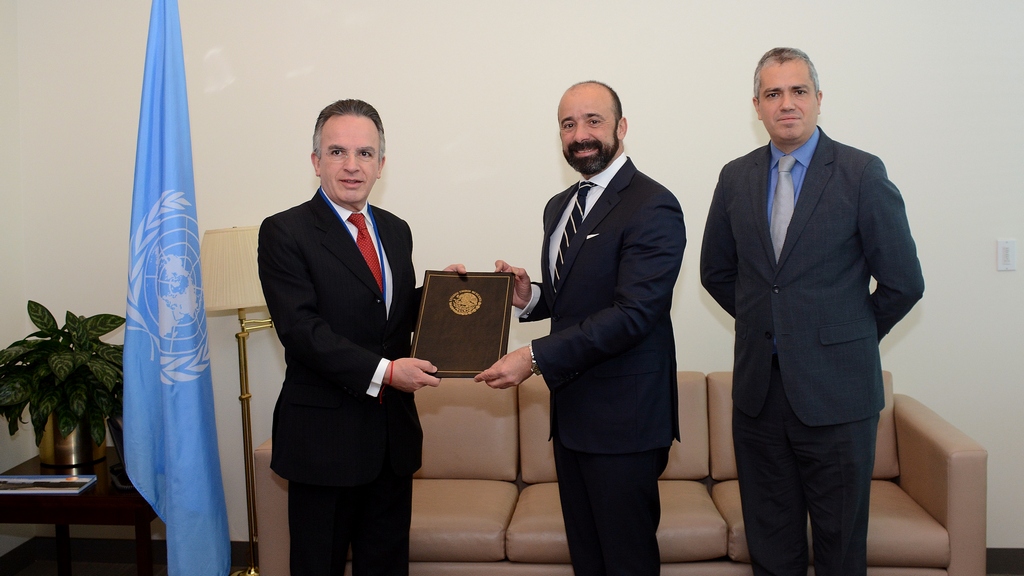