Kazakhstan has signed and ratified the Treaty on the Prohibition of Nuclear Weapons.

Kairat Umarov, the permanent representative of Kazakhstan to the United Nations, signed the treaty on 2 March 2018. He deposited the country’s instrument of ratification with the UN secretary-general on 29 August 2019.

Kazakhstan participated in the negotiation of the treaty at the United Nations in New York in 2017 and voted in favour of its adoption.

The date of its ratification coincided with the UN-sponsored International Day against Nuclear Tests, and marked 70 years since the first Soviet nuclear test was conducted at the Semipalatinsk test site in Kazakhstan. (It also marked 28 years since the closure of that site.)

From 1949 to 1989, an estimated 456 Soviet nuclear tests, including 116 atmospheric tests, were carried out at the Semipalatinsk test site, with devastating long-term consequences for human health and the environment.

In a statement to the United Nations in October 2019, Kazakhstan said that the adoption of the treaty “demonstrates vividly” that a majority of states without nuclear weapons are becoming “increasingly impatient” at the lack of progress by nuclear-armed states in eliminating their arsenals.

Kazakhstan has promoted universal adherence to the treaty, including by co-sponsoring a UN General Assembly resolution in 2019 that calls upon all states to sign, ratify, or accede to the treaty “at the earliest possible date”.

In 2016, Kazakhstan voted in favour of the UN General Assembly resolution that established the formal mandate for states to commence the negotiations in 2017 on “a legally binding instrument to prohibit nuclear weapons, leading towards their total elimination”.

Kazakhstan was among 127 states that endorsed a “humanitarian pledge” in 2015–16 to cooperate “in efforts to stigmatise, prohibit, and eliminate nuclear weapons”. The pledge was instrumental in building momentum and support for convening the negotiations.

Upon the break-up of the Soviet Union in 1991, Kazakhstan inherited approximately 1,400 Soviet nuclear warheads, which it subsequently relinquished, recognizing that its security was best achieved through disarmament.

Kazakhstan is a state party to the 2006 Treaty of Semipalatinsk, which established Central Asia as a nuclear-weapon-free zone. 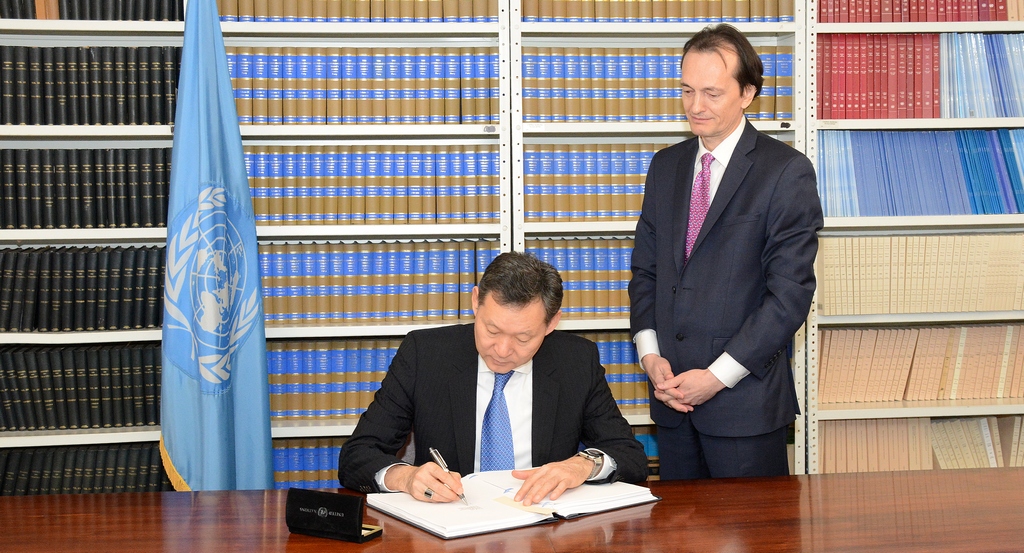