In its report "Squandered: 2021 Global Nuclear Weapons Spending" the International Campaign to Abolish Nuclear Weapons shows in 2021, the year before the Russian invasion of Ukraine, nine nuclear-armed states spent $82.4 billion on their nuclear weapons, more than $156,000 per minute, an inflation-adjusted increase of $6.5 billion from 2020.

The $82.4 billion spent on nuclear weapons was split between governmental departments and private companies. Companies in France, the United Kingdom and the United States were awarded $30 billion in new contracts (some spanning decades into the future), twice as much as they received in 2020. 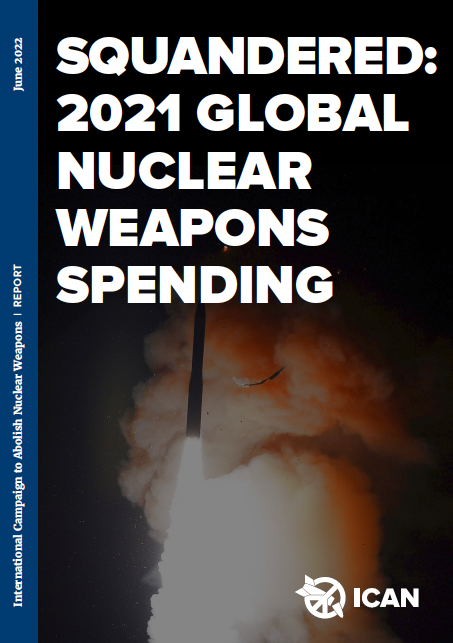 This is the third annual report documenting massive investments in global nuclear weapons spending. Through an ever changing and challenging security environment, from security threats of climate change to the COVID-19 pandemic to the Russian invasion of Ukraine, nuclear weapons spending has steadily increased, with no resulting measurable improvement on the security environment.

As companies throw money at lobbyists and researchers to assert the continued relevance and value of nuclear weapons, the record shows the inutility of weapons of mass destruction to address modern security challenges - and the legitimate fear that they can end civilisation as we know it.

The Treaty on the Prohibition of Nuclear Weapons is the multilateral response to the irresponsible behaviour of all nuclear-armed states to pour money down their nuclear weapons drains. It is the normative barricade against threats to use nuclear weapons. All countries should join this landmark international instrument to prohibit the development and maintenance of nuclear weapons and prevent their eventual use by ensuring their elimination.