Ireland signed the Treaty on the Prohibition of Nuclear Weapons on 20 September 2017 and ratified it on 6 August 2020. It participated in the negotiation of the treaty at the United Nations in New York in 2017 and voted in favour of its adoption.

Simon Coveney, the minister for foreign affairs of Ireland, signed the treaty at a high-level ceremony in New York when it opened for signature on 20 September 2017, describing it as a “ground-breaking treaty”.

Legislation to give effect to the treaty under Irish law was enacted by the Irish parliament, or Oireachtas, on 11 December 2019. In introducing the legislation, the minister of state, Ciarán Cannon, noted the leading role of Ireland in the process that resulted in the adoption of the treaty.

Ireland deposited its instrument of ratification for the treaty with the UN secretary-general on 6 August 2020, the 75th anniversary of the atomic bombing of Hiroshima. Writing in the Irish Times, Mr. Coveney said: “I am proud that Ireland today ratifies the [treaty] ... It honours the memory of the victims of nuclear weapons and the key role played by survivors in providing living testimony and calling on us as successor generations to eliminate nuclear weapons.”

Hazel Chu, the lord mayor of Dublin, said she hoped the ratification would bring us “one step closer to the day when no city will ever again face the threat of the horrific destruction by nuclear weapons inflicted on Hiroshima 75 years ago”.

In the days prior to the ratification, the president of Ireland, Michael D. Higgins, commented that the “historic achievement” of the treaty “would not have been possible without the invaluable input of the hibakusha and the survivors of nuclear testing over many years”.

Ireland has promoted universal adherence to the treaty, including by co-sponsoring a UN General Assembly resolution in 2019 that calls upon all states to sign, ratify, or accede to the treaty “at the earliest possible date”.

In its opening statement to the negotiating conference in 2017, Ireland described the moment as “a pivotal point in our international relations, a time to take stock and honour the testimony of the past, to decide what sort of present we wish to live in and what sort of legacy we wish to leave for future generations”.

It commented that “we are not just writing a new and complementary treaty here, we are taking the opportunity to write a new history and in so doing to create a new, more stable, more secure and more equal future for all”.

Ireland, Austria, Brazil, Mexico, Nigeria, and South Africa comprised a “core group” of states that played a leading role in bringing the negotiations about and ensuring their ultimate success.

In 2016, Ireland was a co-sponsor of the UN General Assembly resolution that established the formal mandate for states to commence the negotiations in 2017 on “a legally binding instrument to prohibit nuclear weapons, leading towards their total elimination”.

Ireland was among 127 states that endorsed a “humanitarian pledge” in 2015–16 to cooperate “in efforts to stigmatise, prohibit, and eliminate nuclear weapons”. The pledge was instrumental in building momentum and support for convening the negotiations. 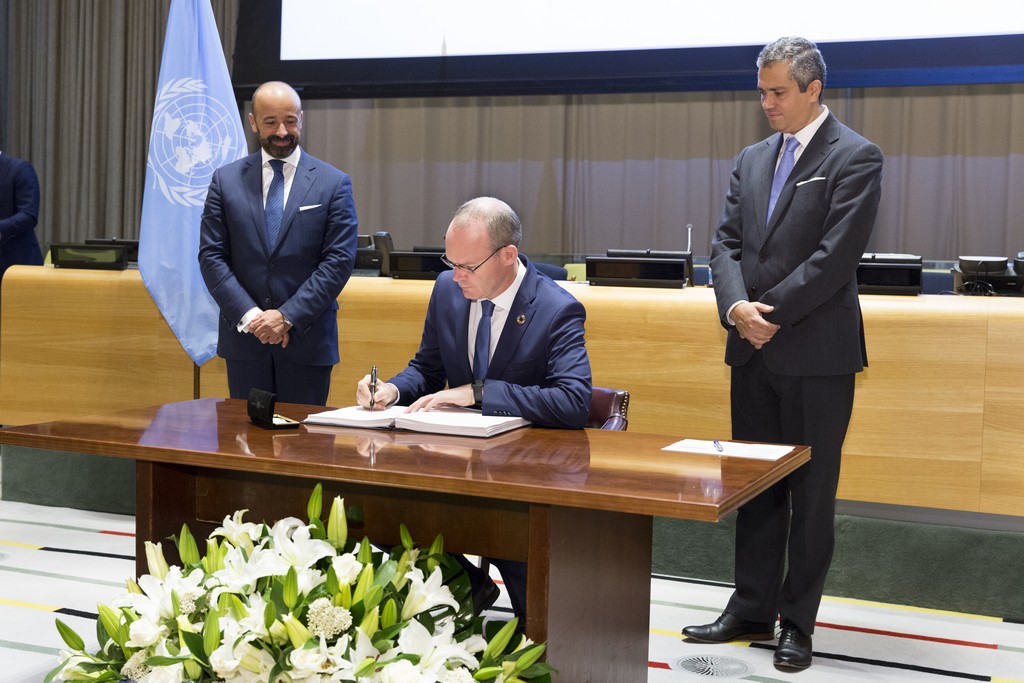 Spain: Why would a country that has banned biological and chemical weapons not ban nuclear weapons?