The study models the potential impacts of a regional nuclear conflict and found that, given the increased size and power of their respective nuclear arsenals, the effects of a nuclear conflict between India and Pakistan would have even more catastrophic impacts than previously thought.

In a scenario where Pakistan uses 150 nuclear weapons and India uses 100 weapons on urban targets, and the two countries use an additional 85 weapons on non-urban targets, over the course of one week: 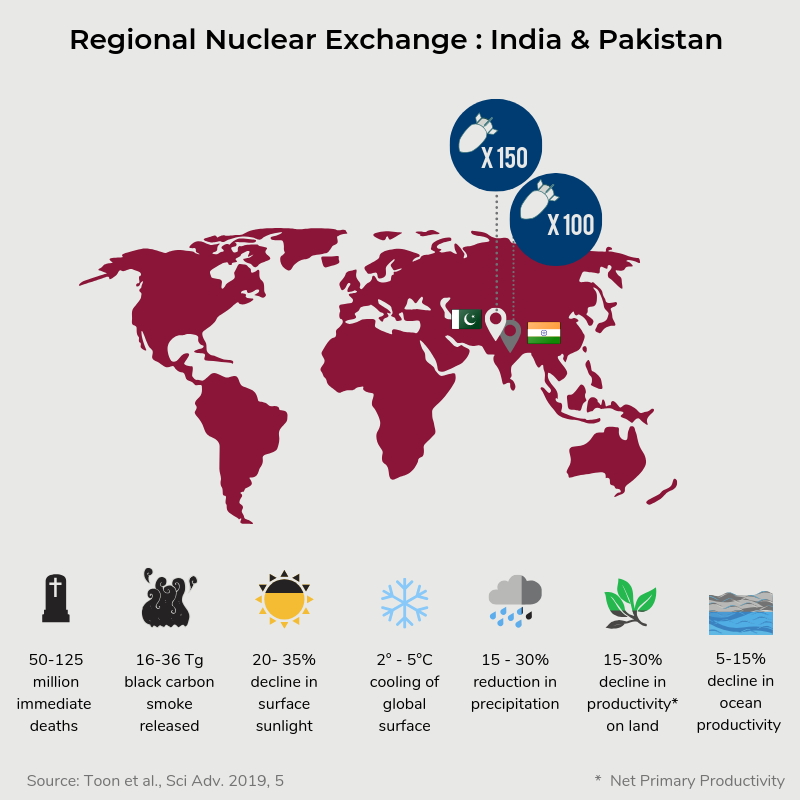 Ira Helfand, author of the 2013 report Nuclear Famine: Climate Effects of Regional Nuclear War and member of ICAN’s International steering group, said: “This is an extremely important study which once again shows that the risks of nuclear conflict are catastrophic and unacceptable. States that have or endorse nuclear weapons put the entire world at risk, and all responsible states must push back by joining the UN Treaty on the Prohibition of Nuclear Weapons.” The 2013 study by International Physicians for the Prevention Nuclear War (IPPNW) explored the impact of the use of 50 Hiroshima-sized bombs by each side during an India-Pakistan nuclear conflict.

“This terrifying study shows that there is no such thing as a ‘contained’ nuclear conflict,” said Beatrice Fihn, Executive Director of the International Campaign to Abolish Nuclear Weapons. “And this is not a remote scenario. India and Pakistan have had two major military incidences in the past few months. Any use of nuclear weapons will mushroom into a global famine threatening all of human existence. That is why the UN Treaty on the Prohibition of Nuclear Weapons is the only responsible response.”

The Toon et al study represents the best estimate of the climate science community about the catastrophic global effects of such a conflict. It was an update of a 2013 study that showed the significant disruption caused by the use of 50 bombs per side, each bomb with the power of the bomb used to decimate Hiroshima. But by 2025, India and Pakistan could have three to five times greater than the number of weapons estimated in previous nuclear winter studies. India’s nuclear arsenal is estimated to grow to 200 nuclear weapons by 2025 and Pakistan’s nuclear arsenal is estimated to grow to 200-250 warheads.

The likelihood of a nuclear conflict between India and Pakistan also seems to be increasing. Tensions have been escalating in the region and there have been two major confrontations between the two nuclear-armed states in the past year. Just last week, Pakistani president Imran Kahn explicitly warned the UN of the rising risk of such a conflict : “We are heading for a potential disaster of proportions that no one here realises [...] It is the only time since the Cuban crisis that two nuclear-armed countries are coming face to face. We did come to face to face in February.”

The only way to eliminate the risk of this catastrophe is to eliminate nuclear weapons. The Treaty on the Prohibition of Nuclear Weapons is well on its way to entry into force after gaining 9 new signatories and 5 new states-parties on September 26. Given this new information about the dire consequences of nuclear war, all countries should join them in joining the TPNW and supporting a world without nuclear weapons.

‘I am Become Death’ comes to Tularosa Basin: The Trinity Test 74 years later