Samoa has signed and ratified the Treaty on the Prohibition of Nuclear Weapons.

Tuila’epa Sailele Malielegaoi, the prime minister and minister for foreign affairs of Samoa, signed the treaty on 20 September 2019. He deposited the country’s instrument of ratification with the UN secretary-general on 26 September 2018.

Samoa participated in the negotiation of the treaty at the United Nations in New York in 2017 and voted in favour of its adoption.

In an address to the United Nations following the signing ceremony in September 2017, Malielegaoi said that Samoa had signed the treaty because “we wanted to demonstrate unequivocally our aspiration to have a world without nuclear weapons”.

He also said that “[t]he conventional narrative that the possession of nuclear weapons will act as [a] deterrent to make the world a safer place to live is not borne out by the current realities” – referring in particular to tensions on the Korean peninsula.

Samoa has promoted universal adherence to the treaty, including by co-sponsoring a UN General Assembly resolution in 2019 that calls upon all states to sign, ratify, or accede to the treaty “at the earliest possible date”.

In a statement to the United Nations in September 2019, Malielegaoi said that “each new signature and ratification of the treaty ban will strengthen global norms against these weapons of terror and move us closer to a nuclear-weapon-free world”.

In 2016, Samoa was a co-sponsor of the UN General Assembly resolution that established the formal mandate for states to commence the negotiations in 2017 on “a legally binding instrument to prohibit nuclear weapons, leading towards their total elimination”.

Samoa was among 127 states that endorsed a “humanitarian pledge” in 2015–16 to cooperate “in efforts to stigmatise, prohibit, and eliminate nuclear weapons”. The pledge was instrumental in building momentum and support for convening the negotiations.

Samoa, together with Fiji, Nauru, Palau, and Tuvalu, submitted a working paper to a UN working group in Geneva in 2016 in which they argued that “the debate should no longer be about whether a global ban on nuclear weapons is necessary, but rather how we can achieve it and what provisions it should contain”.

Samoa is a state party to the 1985 Treaty of Rarotonga, which established the South Pacific as a nuclear-weapon-free zone. 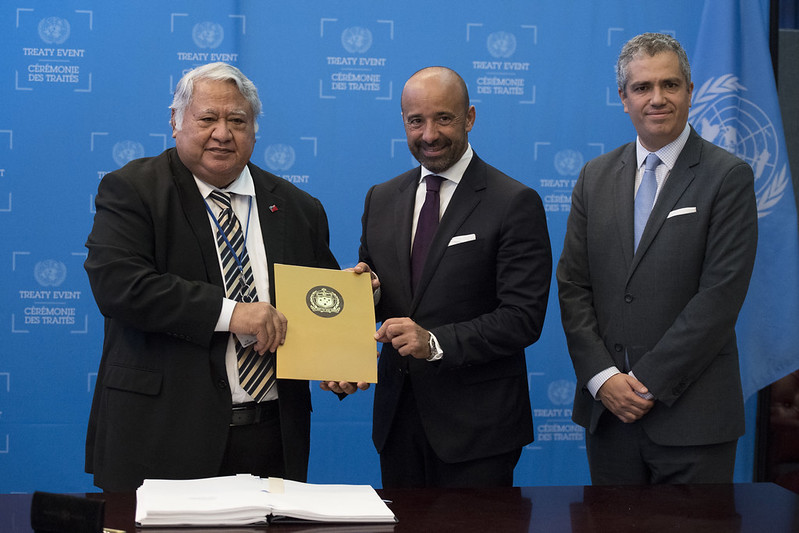