Malaysia signed the Treaty on the Prohibition of Nuclear Weapons on 20 September 2017 and ratified it on 30 September 2020. It participated in the negotiation of the treaty at the United Nations in New York in 2017 and voted in favour of its adoption.

Anifah Aman, the then-minister for foreign affairs of Malaysia, signed the treaty when it opened for signature. He said: “We are convinced that the political and legal impact of this treaty will steer the international community collectively towards the elimination of nuclear weapons.”

He described the treaty as “legally sound [and] feasible to implement” and said that it “sends a powerful political message that nuclear weapons are categorically unacceptable”. 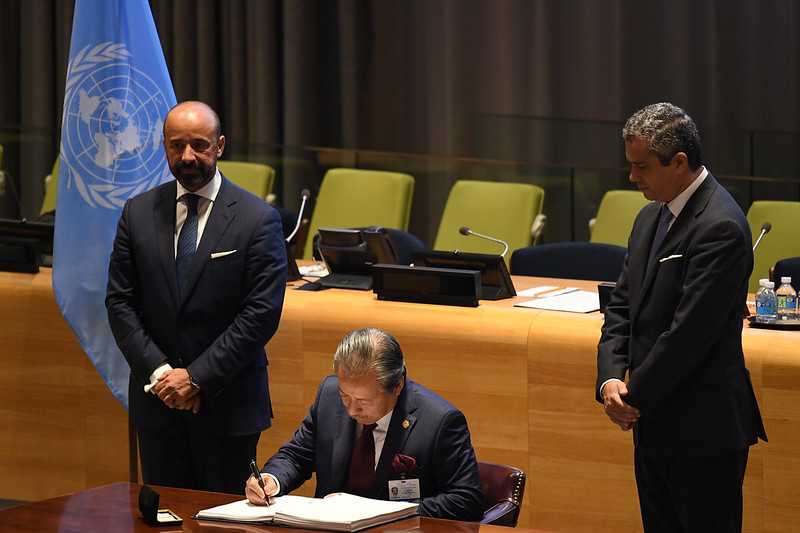 The minister of foreign affairs of Malaysia, Anifah Aman, signs the treaty on 20 September 2017. Credit: ICAN

On 30 September 2020, Hishammuddin Hussein, the minister of foreign affairs, signed the instrument of ratification at a ceremony in the nation’s capital, Kuala Lumpur. It was deposited with the UN secretary-general later that day. “By joining, Malaysia is contributing to the goal of a world free of nuclear weapons,” he wrote.

He added: “We are proud to have contributed to this important treaty, and we encourage other states to expedite their ratifications. Malaysia has always held a principled position that the general and complete elimination of nuclear weapons should be at the top of the international agenda.” 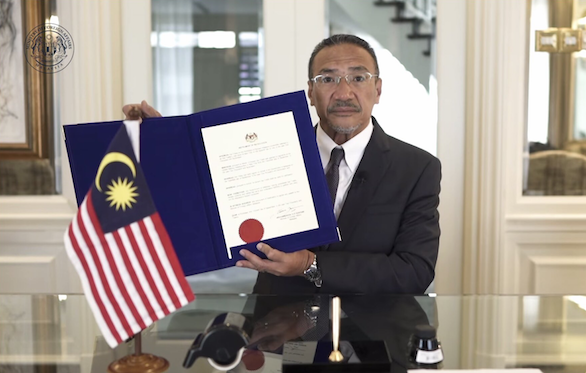 Hishammuddin Hussein, the minister of foreign affairs of Malaysia, with the signed instrument of ratification on 30 September 2020. Credit: Government of Malaysia

Malaysia has promoted universal adherence to the treaty, including by co-sponsoring a UN General Assembly resolution in 2019 that calls upon all states to sign, ratify, or accede to the treaty “at the earliest possible date”.

In a statement to the United Nations in September 2019, Malaysia said that the treaty “complements and strengthens the nuclear disarmament architecture” and urged “all states to have an open and focused approach towards this treaty”.

In its opening statement to the negotiating conference, Malaysia said that “our work here would have a political as well as a legal impact on the disarmament debate” and give impetus to the movement to attain and maintain a nuclear-weapon-free world.

In 2016, Malaysia was an additional co-sponsor of the UN General Assembly resolution that established the formal mandate for states to commence the negotiations in 2017 on “a legally binding instrument to prohibit nuclear weapons, leading towards their total elimination”.

Malaysia was among 127 states that endorsed a “humanitarian pledge” in 2015–16 to cooperate “in efforts to stigmatise, prohibit, and eliminate nuclear weapons”. The pledge was instrumental in building momentum and support for convening the negotiations.

Malaysia is a state party to the 1995 Treaty of Bangkok, which established Southeast Asia as a nuclear-weapon-free zone.