Has signed TPNW, but not ratified

Liechtenstein has signed but not yet ratified the Treaty on the Prohibition of Nuclear Weapons.

Aurelia Frick, the then-minister for foreign affairs of Liechtenstein, signed the treaty on 20 September 2017.

Liechtenstein participated in the negotiation of the treaty at the United Nations in New York in 2017 and voted in favour of its adoption.

Addressing the United Nations after the signing ceremony, Frick said: “No doubt, it will take time to see the effects of the treaty on nuclear stockpiles. But setting a number of important legal benchmarks that will become binding norms is great progress.”

Liechtenstein has promoted universal adherence to the treaty, including by co-sponsoring a UN General Assembly resolution in 2019 that calls upon all states to sign, ratify, or accede to the treaty “at the earliest possible date”.

In a statement to the United Nations in September 2019, Liechtenstein said that the treaty “draws a legal line against all attempts to justify the use of nuclear weapons” and is “a sole beacon of hope and a lesson for multilateralism in a world increasingly suffering from unsustainable big power politics”.

In its opening statement to the negotiating conference, Liechtenstein said that the treaty-making process was “truly of historic nature”, and commented that the “broad and high-level representation here today shows strong political support for this process”.

Responding to the decision of certain states not to “join the negotiating table”, Liechtenstein noted that “throughout history those who are comfortable with the status quo rarely advocate for change”. It expressed confidence that “the movement towards the universal prohibition of nuclear weapons will persist and succeed”.

In 2016, Liechtenstein was a co-sponsor of the UN General Assembly resolution that established the formal mandate for states to commence the negotiations in 2017 on “a legally binding instrument to prohibit nuclear weapons, leading towards their total elimination”.

Liechtenstein was among 127 states that endorsed a “humanitarian pledge” in 2015–16 to cooperate “in efforts to stigmatise, prohibit, and eliminate nuclear weapons”. The pledge was instrumental in building momentum and support for convening the negotiations. 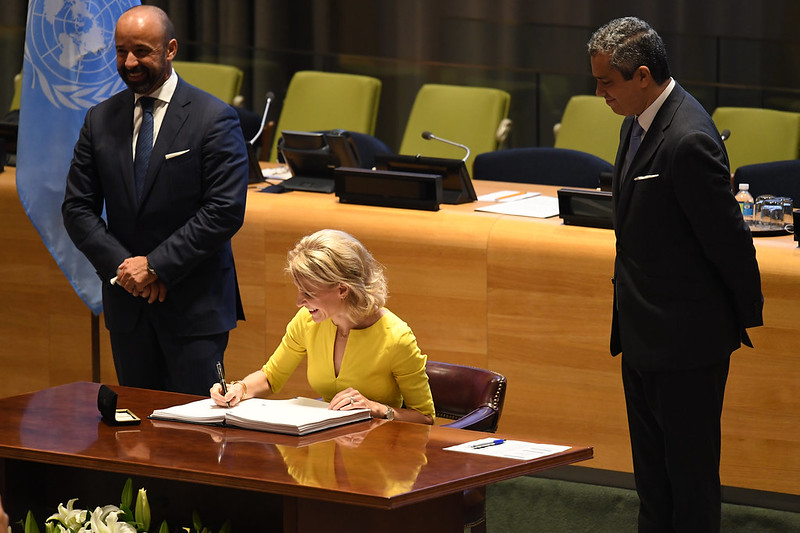