Jamaica has signed and ratified the Treaty on the Prohibition of Nuclear Weapons. It participated in the negotiation of the treaty at the United Nations in New York in 2017 and voted in favour of its adoption.

Courtenay Rattray, the permanent representative of Jamaica to the United Nations, signed the treaty on behalf of the state on 8 December 2017. Jamaica’s instrument of ratification was deposited with the UN secretary-general on 23 October 2020. Jamaica was the equal 48th state to ratify or accede to the treaty.

In a statement delivered on the occasion of its ratification, Jamaica described the treaty as “an indispensable part of the global disarmament framework”. It said: “We join with the growing international consensus on this critical issue [and] ... are proud to be a part of this historic moment for nuclear disarmament.” 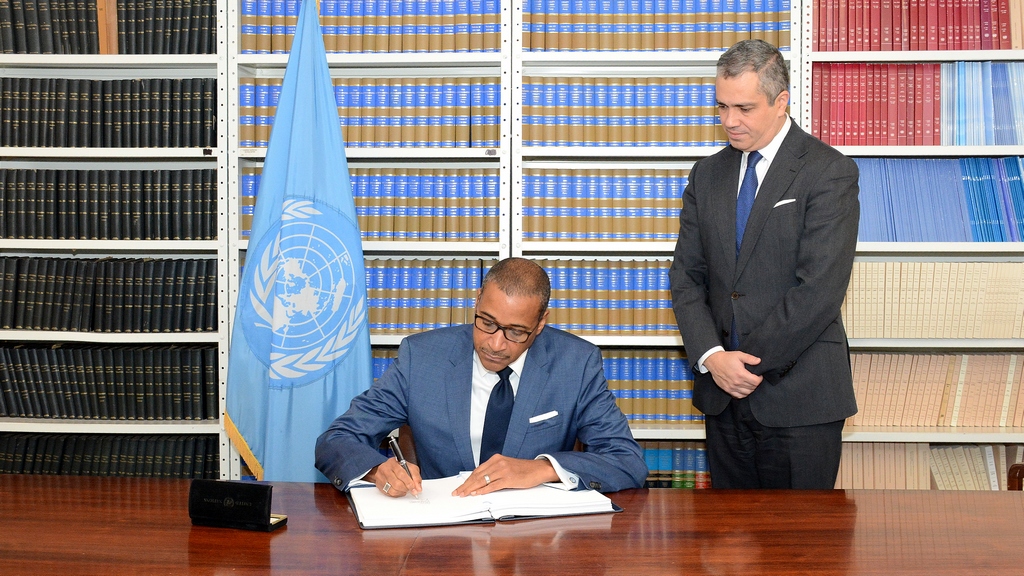 Courtenay Rattray, the permanent representative of Jamaica to the United Nations, signs the treaty on 8 December 2017.

Jamaica has promoted universal adherence to the treaty, including by co-sponsoring a UN General Assembly resolution in 2019 that called upon all states to sign, ratify, or accede to the treaty “at the earliest possible date”. In a statement to the United Nations in October 2019, Jamaica expressed “satisfaction with the steady progress towards signing and ratification” of the treaty.

In its opening statement to the negotiating conference for the treaty in 2017, Jamaica described the treaty-making process as “both timely and critical” given the “heightened level of global uncertainty and insecurity” and “a growing and palpable sense of dissatisfaction” at the failure of nuclear-armed states to fulfil their disarmament obligations.

In an address to the United Nations in September 2017, following the opening for signature of the treaty, the minister for foreign affairs of Jamaica, Kamina Johnson Smith, said that Jamaica welcomed “the fact that we now have the first global treaty on the prohibition of nuclear weapons” and hoped “that it will enter into force in short order and will be duly observed universally”.

In 2016, Jamaica was a co-sponsor of the UN General Assembly resolution that established the formal mandate for states to commence the negotiations in 2017 on “a legally binding instrument to prohibit nuclear weapons, leading towards their total elimination”.

Jamaica was among 127 states that endorsed a “humanitarian pledge” in 2015–16 to cooperate “in efforts to stigmatise, prohibit, and eliminate nuclear weapons”. The pledge was instrumental in building momentum and support for convening the negotiations.

Jamaica is a state party to the 1967 Treaty of Tlatelolco, which established Latin America and the Caribbean as a nuclear-weapon-free zone.