The Holy See has signed and ratified the Treaty on the Prohibition of Nuclear Weapons.

Paul Gallagher, the secretary for relations with states of the Holy See, signed the treaty on 20 September 2017 and deposited the country’s instrument of ratification with the UN secretary-general on the same day.

The Holy See participated in the negotiation of the treaty at the United Nations in New York in 2017 and voted in favour of its adoption.

Addressing the United Nations following the signing ceremony in September 2017, Gallagher said that the treaty “is one more blow on the anvil toward the fulfilment of the prophecy of Isaiah: ‘They shall beat their swords into ploughshares and their spears into pruning hooks.’”

In a statement to the United Nations in September 2019, the secretary of state of the Holy See, Pietro Parolin, hailed the treaty as “an important step towards a nuclear-weapons-free world”, and encouraged all signatory states “to ratify it as soon as possible”.

In a statement to the negotiating conference, Pope Francis, the sovereign of the Holy See, expressed his wish that the treaty-making process may “constitute a decisive step along the road towards a world without nuclear weapons”, which is “not beyond our reach”.

On a historic visit to the A-bombed cities of Hiroshima and Nagasaki in November 2019, the Pope condemned the use and possession of nuclear weapons as “immoral”, and urged support for “the principal international legal instruments of nuclear disarmament and non-proliferation, including the Treaty on the Prohibition of Nuclear Weapons”. 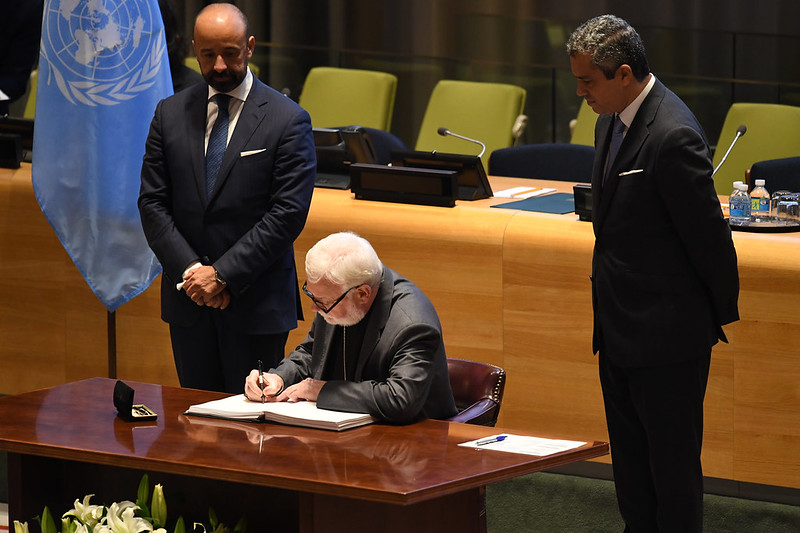