Thailand has signed and ratified the Treaty on the Prohibition of Nuclear Weapons.

Don Pramudwinai, the minister for foreign affairs of Thailand, signed the treaty on 20 September 2017, and deposited his country’s instrument of ratification with the UN secretary-general on the same day.

In an address to the United Nations following the signing ceremony in September 2017, Pramudwinai said that Thailand was “proud” to be among the first states to ratify the treaty: “We wish to call on others to do the same. By doing so, we are sending out our message to our children and grandchildren that we do care.”

Thailand participated in the negotiation of the treaty at the United Nations in New York in 2017 and voted in favour of its adoption.

Thailand has promoted universal adherence to the treaty, including by co-sponsoring a UN General Assembly resolution in 2019 that calls upon all states to sign, ratify, or accede to the treaty “at the earliest possible date”.

In October 2020, Pramudwinai encouraged nations to “keep up this momentum and continue to put in collective efforts both to ratify the treaty and to urge our friends from near and far who have yet to join to do so”.

In a statement to the United Nations in September 2019, Thailand said that the treaty “truly reflects a global call to rid the world of these terrible weapons” and urged “all states to sign and ratify the treaty at the earliest opportunity”.

In August 2018, Thailand hosted a regional workshop in Bangkok to encourage members of the Association of Southeast Asian Nations to become parties to the treaty. Delegations representing nine states from the region attended the workshop.

In its opening statement to the negotiating conference, Thailand said that the new treaty would be “a concrete and historical step of mankind” that establishes an “international norm” delegitimising nuclear weapons.

In 2016, Thailand was a co-sponsor of the UN General Assembly resolution that established the formal mandate for states to commence the negotiations in 2017 on “a legally binding instrument to prohibit nuclear weapons, leading towards their total elimination”.

The resolution implemented the key recommendation of the report of a UN open-ended working group on nuclear disarmament that convened in Geneva earlier in 2016. Thani Thongphakdi, the permanent representative of Thailand to the United Nations in Geneva, chaired the working group.

Thailand was among 127 states that endorsed a “humanitarian pledge” in 2015–16 to cooperate “in efforts to stigmatise, prohibit, and eliminate nuclear weapons”. The pledge was instrumental in building momentum and support for convening the negotiations.

Thailand is a state party to the 1995 Treaty of Bangkok, which established Southeast Asia as a nuclear-weapon-free zone. 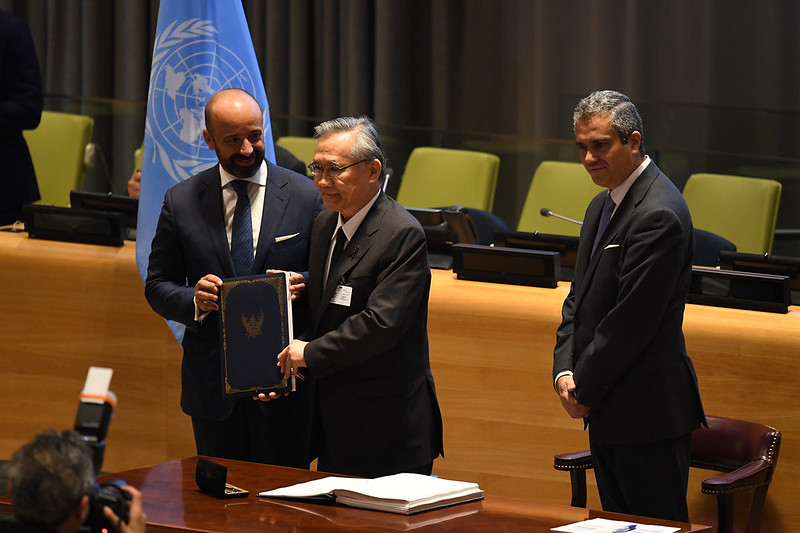