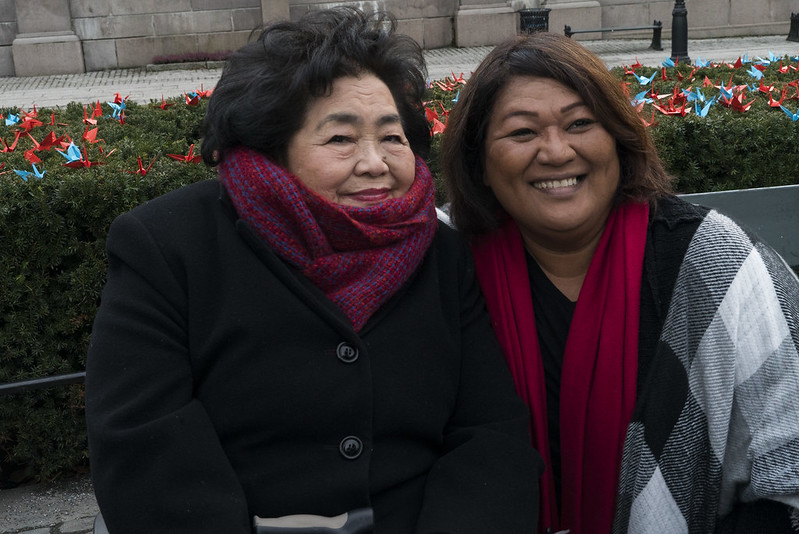 The way we talk about nuclear weapons must reflect their real, unacceptable effects on human beings. If we are going to eliminate nuclear weapons, we need to emphasise the humanitarian risk and share the stories of the survivors of nuclear testing and use. These are just some of their stories:

"If you love this Planet" Setsuko Thurlow, Hiroshima survivor and ICAN campaigner

Setsuko Thurlow was a 13-year-old schoolgirl when the United States dropped an atomic bomb on her city, Hiroshima. Today, she is a leading figure in the International Campaign to Abolish Nuclear Weapons (ICAN). Her powerful speeches have inspired countless individuals around the world to take action for disarmament.  A living witness to the horrors of nuclear war, she has contributed enormously to the success of ICAN over the past decade. She was instrumental in the creation of the landmark Treaty on the Prohibition of Nuclear Weapons, adopted in July 2017 with the support of 122 nations.

Read more messages and testimonies from hibakusha, survivors of the atomic bombs in Hiroshima and Nagasaki, at Hibakushastories.org and the 1945project.com.

"A human life holds more weight than that of the earth. Nuclear weapons and humans cannot coexist. Peace cannot be derived from a hateful heart."

"Anointed" - the legacy of nuclear weapons testing in the Pacific

This heart-wrenching poem about radioactive racism and the long quest for peace and justice, written and spoken by ICAN campaigner Kathy Jetnil-Kijiner of the Marshall Islands, where the United States conducted 67 nuclear test explosions.

"We heard it here, loud and clear, and felt the ground shake. We seen the radiation fall out over our camp. It was moving very quietly and very deadly.” – Yami Lester

In the 2016 Black Mist White Rain Speaking Tour, survivors from different communities explored the ongoing impacts of nuclear testing in Australia and the Pacific came together to share stories from the front lines. Watch this powerful testimony by Auntie Sue Coleman-Haseldine, an indigenous Australian nuclear test survivor, who was about three years old when the British nuclear weapons tests took place at Maralinga in the remote West of South Australia.

“People were playing with the fallout as it fell from the sky… We put it in our hair as if it was soap or shampoo. But later I lost all my hair from it.” – Rinok Riklon

Nearly a quarter of the world’s nuclear tests during the Cold War were conducted at the Semipalatinsk Test Site in Kazakhstan. The communities that lived in the area, and their children and grandchildren, live with the consequences of these tests to this day. Explore the powerful photo-series by photo-journalist Phil Hatcher-Moore to learn more about their stories.