The Human Cost of Nuclear Testing 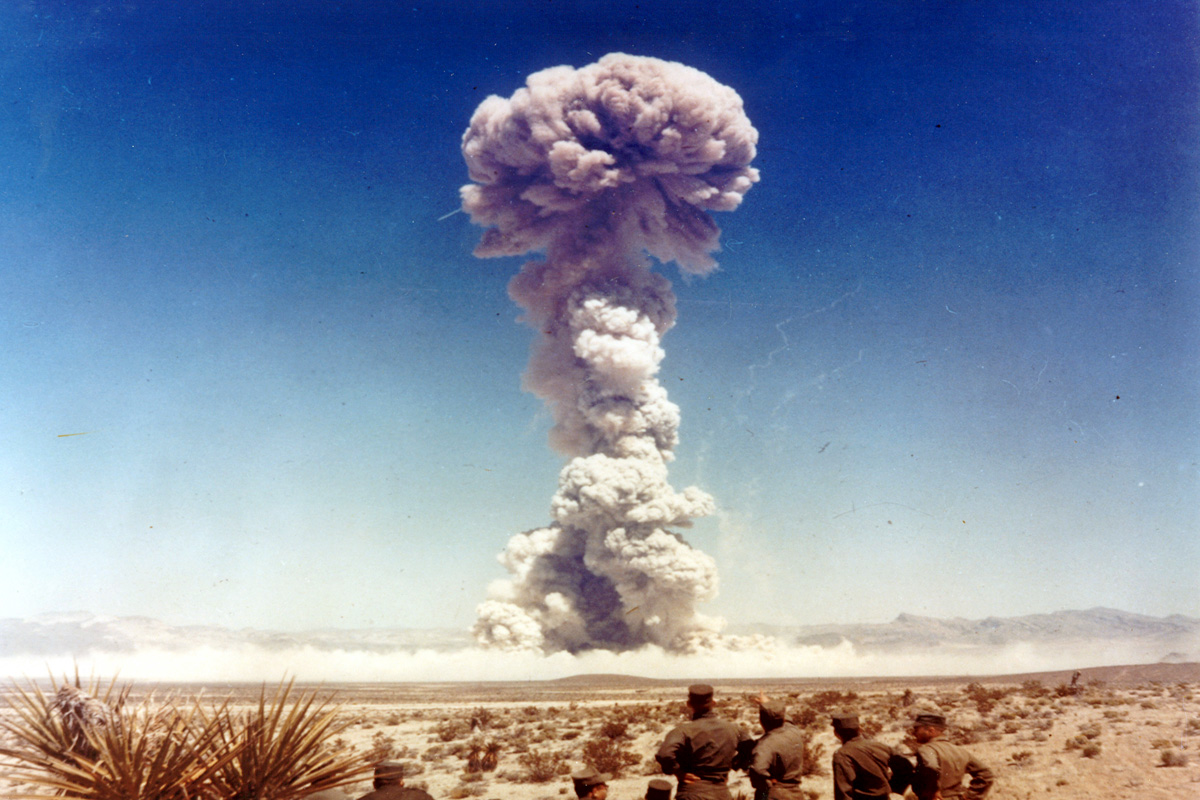 From 1945 to 2017, more than two thousand nuclear test explosions were conducted around the world, resulting in epidemics of cancers and other chronic illnesses. Large swathes of land remain radioactive and unsafe for habitation, even decades after test sites were closed. The victims of these toxic experiments must not be forgotten – and their demands for justice and assistance must be met.

In the New Mexico desert just three weeks before the atomic bombings of Hiroshima and Nagasaki, the United States conducted the world’s first nuclear test explosion, code-named “Trinity”. Its giant fireball turned the sands into glass, illuminated the surrounding mountains, and sent a mushroom cloud of radioactive debris 12 kilometres into the sky.

In the seven and a half decades since that fateful July morning in 1945, at least eight nations have carried out a total of 2,056 nuclear tests – around one-quarter of them in the atmosphere – causing long-term harm to human health and the environment. “The legacy of nuclear testing is nothing but destruction,” reflected the UN secretary-general, António Guterres, in 2019.

More than 60 sites around the world bear the scars of these tests. Even those that have been closed for decades and partially cleaned up remain uninhabitable. The sheer scale of the devastation is staggering. The 528 atmospheric tests alone had a destructive force equal to 29,000 Hiroshima bombs. They dispersed radioactive particles far and wide, poisoning the soil, air, and water.

While the era of explosive nuclear testing appears to have come to a halt – with the last nuclear test conducted in 2017 by North Korea – the implications for people’s lives and the Earth’s fragile ecosystems will be felt for generations to come. The international community has a duty not only to ensure that such destruction is never wrought again; it must also work to address the harm already done.

When Setsuko Thurlow, a Hiroshima survivor and lifelong disarmament activist, jointly accepted the Nobel Peace Prize awarded to ICAN in 2017, she said that Japan’s hibakusha – literally, “bomb-exposed people” – have always stood in solidarity with others around the world harmed by the bomb.

“People from places with long-forgotten names, like Moruroa, Ekker, Semipalatinsk, Maralinga, Bikini. People whose lands and seas were irradiated, whose bodies were experimented upon, whose cultures were forever disrupted.”

Like the Japanese atomic bomb survivors, she said, these people were not content to be victims. “We refused to sit idly in terror as the so-called great powers took us past nuclear dusk and brought us recklessly close to nuclear midnight. We rose up. We shared our stories of survival. We said: humanity and nuclear weapons cannot coexist.” 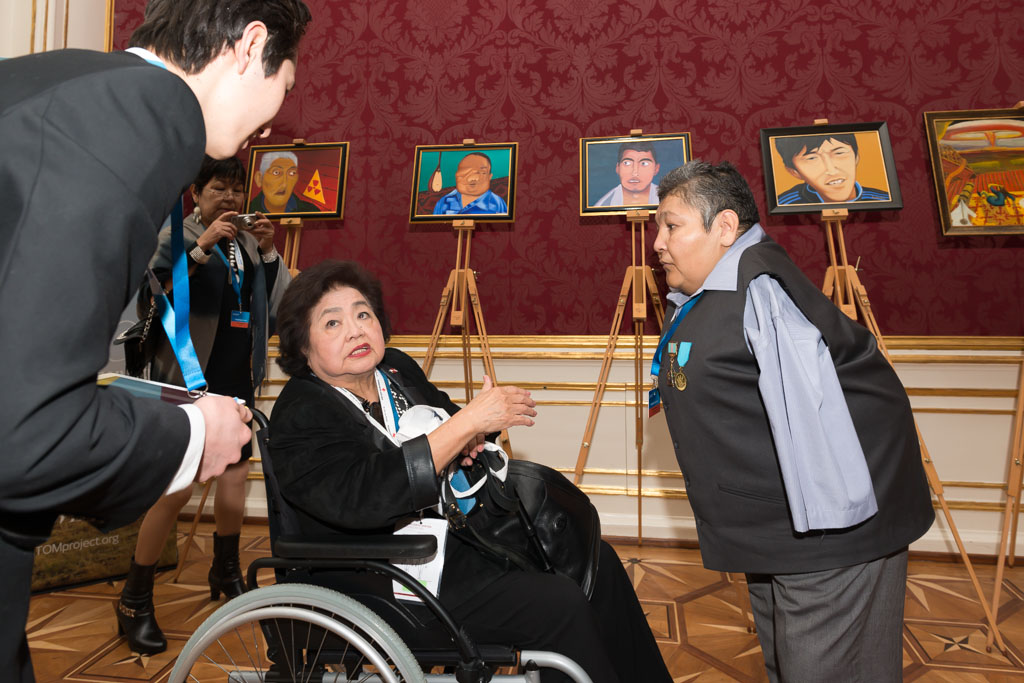 The strong global taboo that exists today against the use and testing of nuclear weapons is in large part the result of decades of popular resistance to man’s deadliest creation. Advocacy by survivors, in particular – as living witnesses to the horrors of the atomic age – has awakened decision-makers to the brutal reality of what nuclear weapons do to human bodies and our planet.

In the years after the attacks on Hiroshima and Nagasaki, the global opposition to nuclear weapons grew stronger. This was especially so when the United States began testing high-yield thermonuclear bombs at Bikini Atoll in the Marshall Islands. The infamous “Bravo” shot of 1954, which had a destructive force equal to 15 million tonnes of TNT, blanketed inhabitants of nearby islands with radiation and ash – which they termed “Bikini snow”. 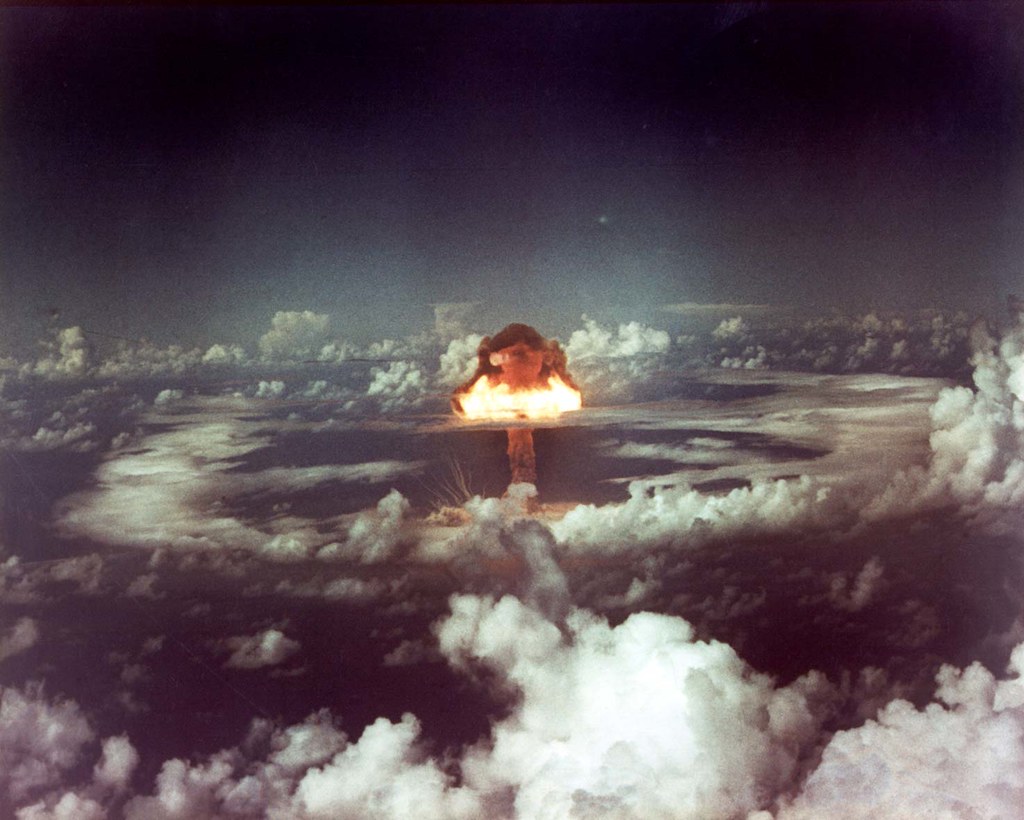 The United States detonates a nuclear weapon at Eniwetok Atoll in the Marshall Islands in 1952. It conducted a total of 67 nuclear tests there up until 1958. Credit: US Government

Growing worldwide concern about fallout from atmospheric tests, including the effects of strontium-90 on breastfeeding mothers and their babies, was a catalyst for the conclusion of the Partial Test Ban Treaty in 1963, which outlawed nuclear testing in the atmosphere, underwater, and in space – but not underground. The United States, Soviet Union, and United Kingdom became parties; France and China did not, and went on to conduct atmospheric tests.

The 1996 Comprehensive Nuclear Test Ban Treaty (not yet in force) and the 2017 Treaty on the Prohibition of Nuclear Weapons ban all forms of nuclear testing, whereas the 1963 Partial Test Ban Treaty bans only some forms of testing.

Mass protests against nuclear testing continued for another three decades. The Nevada-Semipalatinsk Movement, which emerged in Kazakhstan in the 1980s, helped close the site where 456 of the Soviet Union’s tests were conducted. Outrage at French nuclear testing in the South Pacific prompted a global boycott of French wines and cheeses.

Recognizing that even underground tests were causing serious harm, and eager to bring the era of nuclear testing to an end, the international community adopted the Comprehensive Nuclear Test Ban Treaty in 1996. Though still not in force due to the lack of support of certain states, it has established a de facto moratorium on all forms of nuclear testing. Only one state, North Korea, has violated the treaty’s norm in the 21st century.

Building on this earlier legal framework, the Treaty on the Prohibition of Nuclear Weapons, or nuclear weapon ban treaty, was adopted by 122 states in 2017. It not only seeks the total abolition of nuclear weapons, but also requires, for the first time, international cooperation to assist victims of such testing and help remediate contaminated environments.

During the negotiation of this landmark accord, nuclear test survivors shared their stories with governments. Sue Coleman-Haseldine, an elder of the Kokatha nation in Australia, said that the United Kingdom had shown scant regard for the welfare of her people when it poisoned their lands with nuclear bomb blasts in the 1950s. 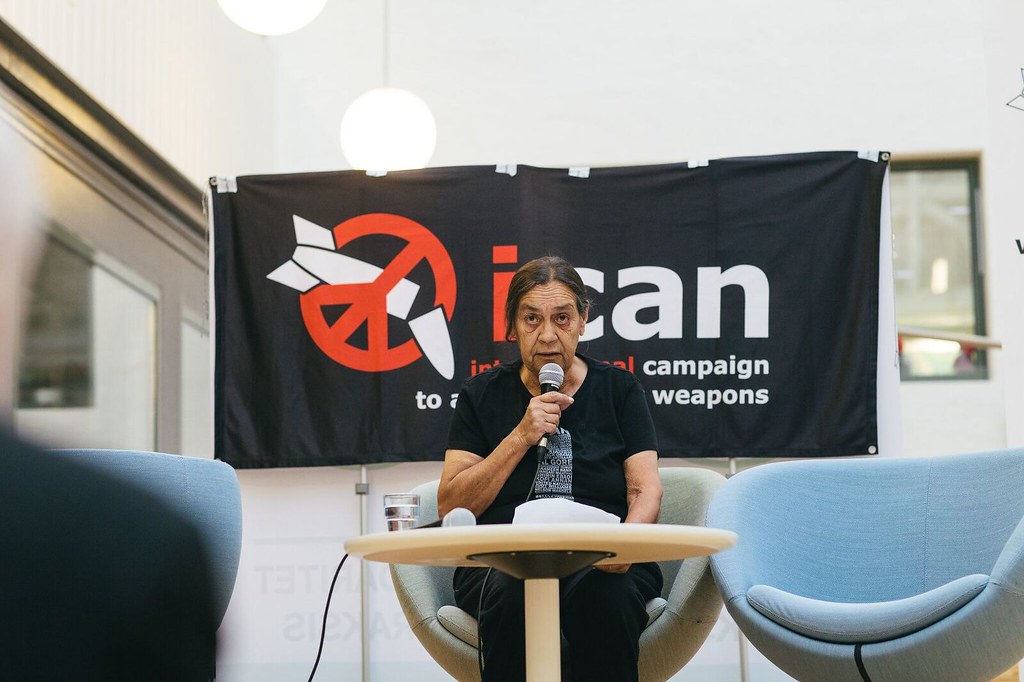 Sue Coleman-Haseldine, an elder of the Kokatha nation of Australia, speaks in 2017 about the ongoing impact of British nuclear testing on Aboriginal land. Credit: Kristian Laemmle-Ruff

Many Aboriginal people were still living close to the test areas and received no forewarning of the explosions, she said. The tests permanently disconnected Aboriginal people from their homes and traditional way of life. They cannot return to their ancestral land, and “their children and their children’s children will never know the special religious places it contains”.

In its preamble, the nuclear weapon ban treaty acknowledges the disproportionate impact of nuclear weapon activities on indigenous peoples. “Our land, our sea, our communities and our physical bodies carry [the legacy of these deadly experiments] with us now, and for unknown generations to come,” a coalition of indigenous groups said during the negotiations.

Racist beliefs have underpinned many of the decisions concerning nuclear test programmes, they noted, with colonial forces often viewing indigenous peoples as expendable and their sacred lands as worthless. In most cases, consent for the tests was never sought, let alone granted, and little or no protection was offered.

In the pursuit of “ever-deadlier weapons of mass destruction”, authorities treated indigenous peoples as “guinea pigs”, the groups said. They have “subjected our peoples to epidemics of cancers, chronic diseases and congenital abnormalities”, and in some cases “denied us access to adequate medical care and even our own medical records”. 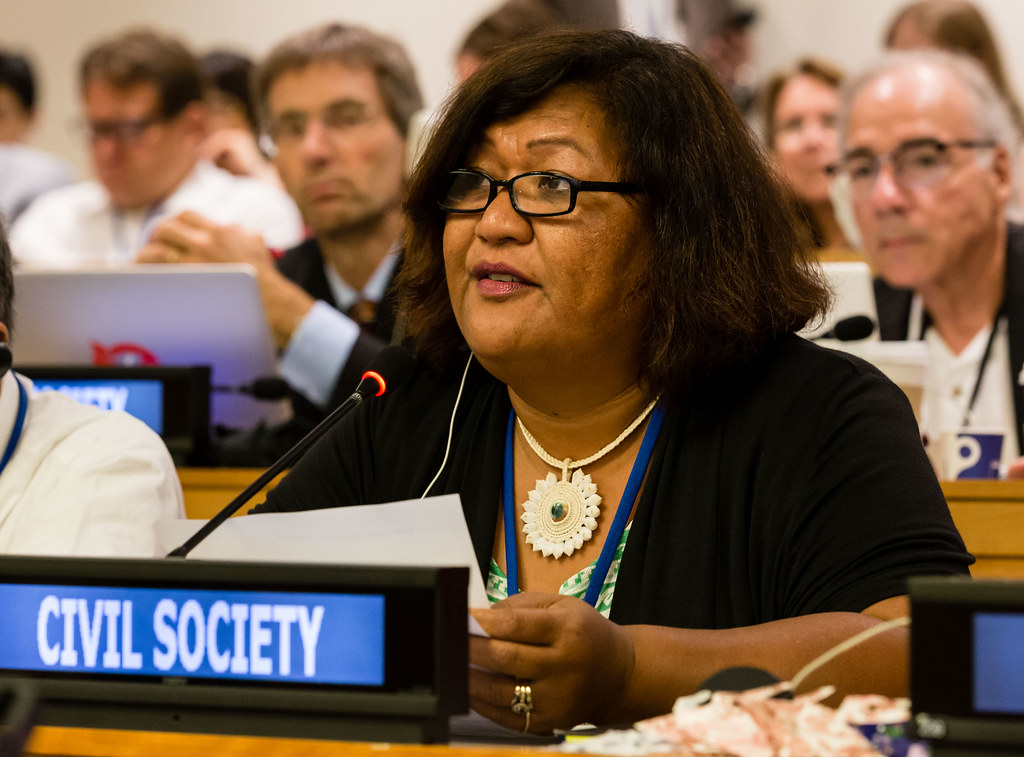 Abacca Anjain-Maddison of the Marshall Islands speaks on the final day of the nuclear weapon ban treaty negotiations in New York in 2017. Credit: Ralf Schlesener

The ban treaty’s preamble also acknowledges the disproportionate impact of nuclear weapons on women and girls, including as a result of their greater vulnerability to the effects of ionizing radiation. Nuclear test survivors from the Marshall Islands and elsewhere have testified to alarmingly high rates of stillbirths, miscarriages, birth defects, and reproductive problems in their communities.

In 2016, a group of Pacific island states wrote that the terrible history of nuclear testing in their region had motivated them to work for the new treaty. Our people “have suffered and continue to suffer untold anguish, heartache, and pain”. Over the course of half a century, the United States, United Kingdom, and France detonated more than 300 nuclear weapons in the Pacific. Decades later, entire atolls remain unsafe for habitation, agricultural production, and fishing.

Few survivors of nuclear testing anywhere in the world have ever been compensated for their suffering. Where efforts have been made to clean up former test sites, they have been woefully inadequate. At some test sites, dilapidated infrastructure poses an ongoing risk of further contamination.

As the Pacific island states acknowledged in their paper, “it will never be possible to restore fully our precious islands to their former pristine state, nor to undo the harm inflicted upon our people over generations”, but the international community can and must “ensure that nuclear weapons are never used again, whether in testing programmes or in warfare” – and that requires their total elimination. 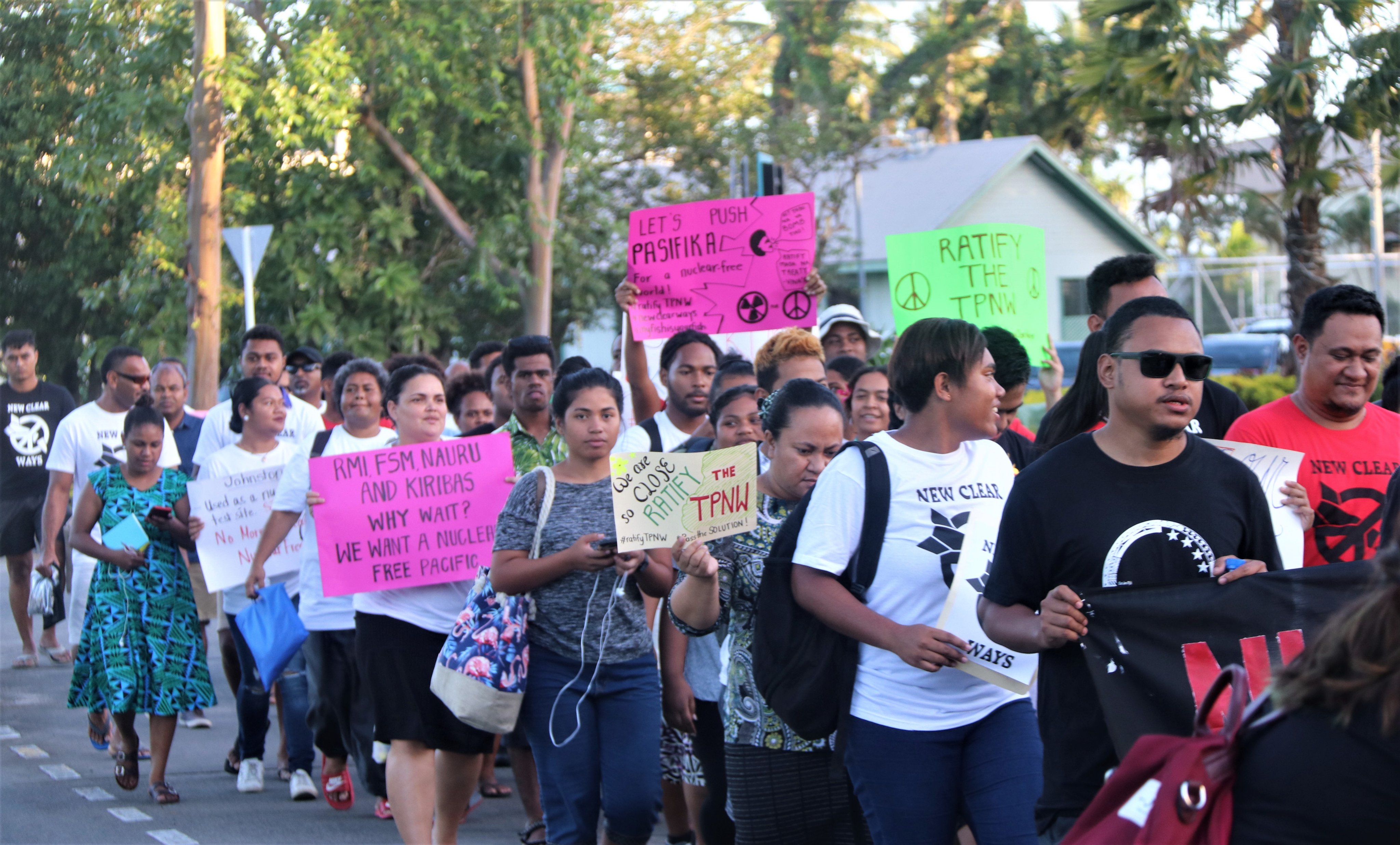 More than a hundred people, mostly students from across the Pacific, march through the streets of Suva, Fiji, in 2020 in support of the nuclear weapon ban treaty. Credit: Youngsolwara