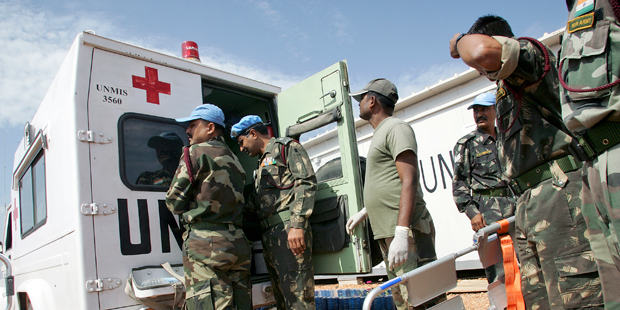 A nuclear attack anywhere in the world would overwhelm the health infrastructure, making an effective humanitarian response impossible.

Nuclear bombings eradicate the social infrastructure required for recovery from conflict. Communications and transportation systems, fire-fighting equipment, and hospitals would all lie in rubble throughout a zone of complete destruction extending for kilometres. Those attempting to provide relief to the sick or wounded would be exposed to high levels of radioactivity, risking their own lives. Nowhere in the world would it be possible to render an effective humanitarian response, underscoring the absolute imperative of nuclear abolition.

The Red Cross and UN agencies

Consistent with the humanitarian vision of its founder Henry Dunant, the International Committee of the Red Cross first called for nuclear weapons to be banned in September 1945, just weeks after the atomic bombings of Hiroshima and Nagasaki. Since then, it has repeatedly warned that nuclear weapons will not spare hospitals, prisoner-of-war camps and civilians, and “their inevitable consequence is extermination”. In 2010 the Committee adopted the prohibition of nuclear weapons as one of its top priorities.

In 1984, at the height of the cold war, the World Health Organization published a definitive study on the global health repercussions of nuclear war. Its report, updated in 1987, concluded that the immediate and delayed loss of human and animal life would be enormous, and “the plight of survivors would be physically and psychologically appalling”. Nuclear disarmament is directly relevant to the work of many UN agencies, including those responsible for refugees, human rights, development, food security and the environment.

“Nuclear weapons constitute the greatest immediate threat to the health and welfare of mankind. It is obvious that no health service in any area of the world would be capable of dealing adequately with the hundreds of thousands of people seriously injured by blast, heat or radiation from even a single one-megaton bomb. Whatever remained of the medical services in the world could not alleviate the disaster in any significant way. To the immediate catastrophe must be added the long-term effects on the environment. Famine and diseases would be widespread, and social and economic systems would be totally disrupted. Therefore the only approach to the treatment of the health effects of nuclear explosions is primary prevention of such explosions.”