Myanmar has signed but not yet ratified the Treaty on the Prohibition of Nuclear Weapons.

U Kyaw Tin, the minister for international cooperation of Myanmar, signed the treaty at a high-level ceremony on 26 September 2018.

Myanmar participated in the negotiation of the treaty at the United Nations in New York in 2017 and voted in favour of its adoption.

Myanmar’s legislature, the Assembly of the Union, approved signature of the treaty that month at the recommendation of the president, U Win Myint. In a debate, lawmakers said that signing the treaty would enhance Myanmar’s image abroad.

The government of Myanmar announced in October 2019 that it is “actively considering” ratification of the treaty. It has “strongly encourage[d] fellow [UN] member countries to join the treaty to demonstrate political will towards nuclear disarmament”.

Myanmar voted in favour of a UN General Assembly resolution in 2019 that welcomed the adoption of the treaty and called upon “all states that have not yet done so to sign, ratify, accept, approve, or accede to the treaty at the earliest possible date”.

In its opening statement to the negotiating conference, Myanmar said that the successful implementation of the treaty would “be a long-term process and require political commitment”, and it would “further revitalise nuclear disarmament and non-proliferation initiatives at the United Nations”.

In 2016, Myanmar voted in favour of the UN General Assembly resolution that established the formal mandate for states to commence the negotiations in 2017 on “a legally binding instrument to prohibit nuclear weapons, leading towards their total elimination”.

Prior to the adoption of the treaty in 2017, nuclear weapons were the only weapons of mass destruction not subject to a comprehensive, globally applicable treaty prohibition. Myanmar supported calls in the UN General Assembly fill this “legal gap”.

Myanmar is a state party to the 1995 Treaty of Bangkok, which established Southeast Asia as a nuclear-weapon-free zone. 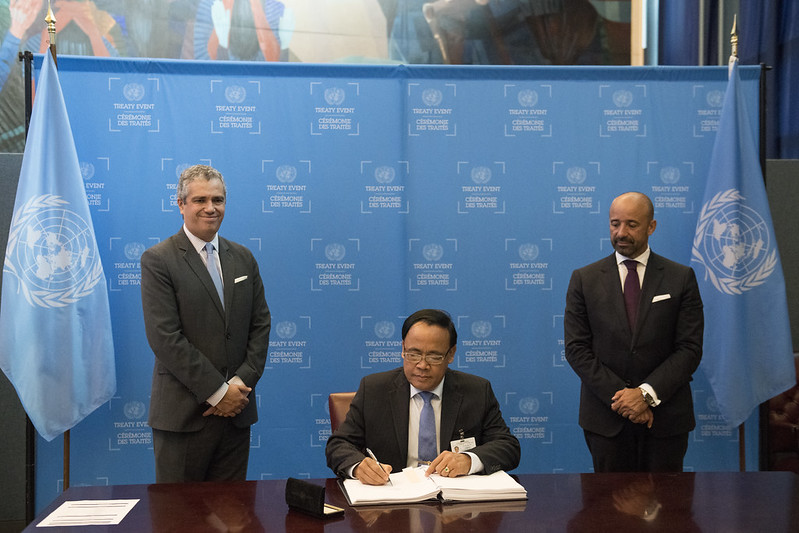