The Maldives have signed and ratified the Treaty on the Prohibition of Nuclear Weapons.

Abdulla Shahid, the minister for foreign affairs of the Maldives, signed the treaty at a high-level ceremony on 26 September 2019 and deposited the country’s instrument of ratification with the UN secretary-general on the same day.

The Maldives did not formally participate in the negotiation of the treaty at the United Nations in New York in 2017 and thus did not vote on its adoption. However, following the vote, it informed the UN secretariat that it had intended to vote in favour.

Shahid said that the Maldives decided to sign and ratify the treaty because of its “commitment as a [UN] member state to the principles enshrined in the UN charter and also because the well-being, prosperity, and advancement of humanity is a collective responsibility of all”.

The Maldives has promoted universal adherence to the treaty, including by co-sponsoring a UN General Assembly resolution in 2019 that calls upon all states to sign, ratify, or accede to the treaty “at the earliest possible date”.

In an address to the United Nations in September 2017, the previous minister for foreign affairs, Mohamed Asim, described the treaty as “the most important pledge that the international community has made in the relentless pursuit of a nuclear-free world”.

In 2016, the Maldives voted in favour of the UN General Assembly resolution that established the formal mandate for states to commence the negotiations in 2017 on “a legally binding instrument to prohibit nuclear weapons, leading towards their total elimination”.

Prior to the adoption of the treaty in 2017, nuclear weapons were the only weapons of mass destruction not subject to a comprehensive, globally applicable treaty prohibition. The Maldives supported calls in the UN General Assembly fill this “legal gap”. 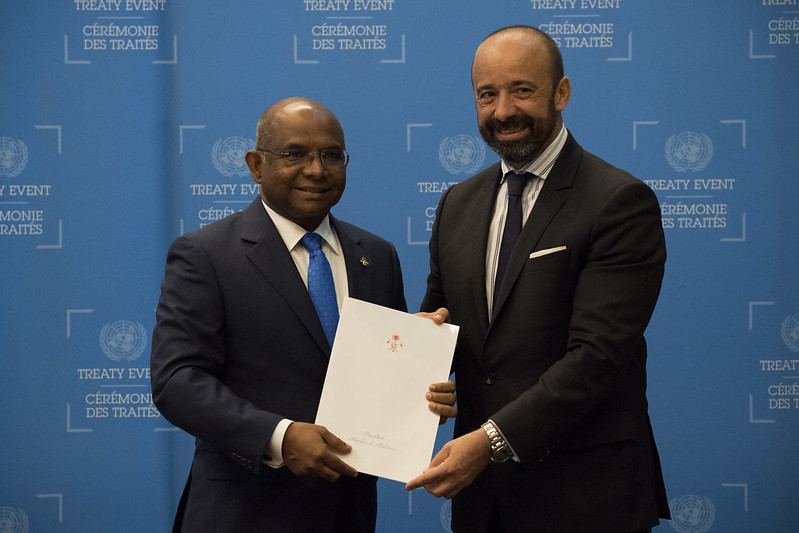