Here are some highlights of ICAN's campaign work in 2016.

This has been a huge year for ICAN. We achieved a major breakthrough in October when the United Nations voted to launch negotiations on a treaty banning nuclear weapons – something that could not have happened without the dedicated efforts of our many campaigners around the world. Here are some of the highlights of 2016.

Prominent ICAN supporter Setsuko Thurlow, who survived the atomic bombing of Hiroshima in 1945, is named Arms Control Person of the Year for 2015 in recognition of her unstinting efforts to advance a global ban on nuclear weapons.

Groundbreaking talks begin at the United Nations in Geneva on developing a new legal instrument to achieve and maintain a nuclear-weapon-free world. ICAN sets out what elements should be included in the instrument.

27 February: Thousands rally against nuclear weapons in the UK

The Campaign for Nuclear Disarmament, an ICAN partner organization in the United Kingdom, brings together an estimated 70,000 people in London for what is dubbed the country’s biggest anti-nuclear weapons rally in a generation.

Indigenous women from Australia and the Marshall Islands take part in a four-city speaking tour, informing the Australian public about how nuclear testing has impacted their lives and why a treaty banning nuclear weapons is urgently needed.

As a result of a citizens' initiative led by ICAN partner organization PAX, a majority of parliamentarians in the Netherlands vote “yes” to a motion urging the government to work internationally for a ban on nuclear weapons.

30 April – 1 May: ICAN activists from 38 nations gather in Geneva

Ahead of the May session of the UN working group on nuclear disarmament, 130 ICAN campaigners from 38 countries meet in Geneva to discuss effective advocacy in nuclear-free states, “nuclear umbrella” states and nuclear-armed states.

2 May: Global health federations issue joint appeal for a ban

The leading international federations representing the world’s physicians, public health professionals and nurses join forces for the first time to warn governments that urgent action is needed to prohibit and eliminate nuclear weapons.

2 May: More than 800 parliamentarians call for a ban

ICAN delivers an appeal signed by 838 parliamentarians in 42 nations to the chair of the UN working group, stating that the only way to guarantee that nuclear weapons will never be used again is to outlaw and eliminate them without further delay.

12 May: US actor Michael Douglas speaks at ICAN press conference

ICAN and Ploughshares Fund hold a press conference in Geneva with UN messenger for peace Michael Douglas. The Hollywood actor praises ICAN for its work to highlight the catastrophic humanitarian consequences of nuclear weapon detonations.

2-13 May: UN discussions continue on the need for a ban 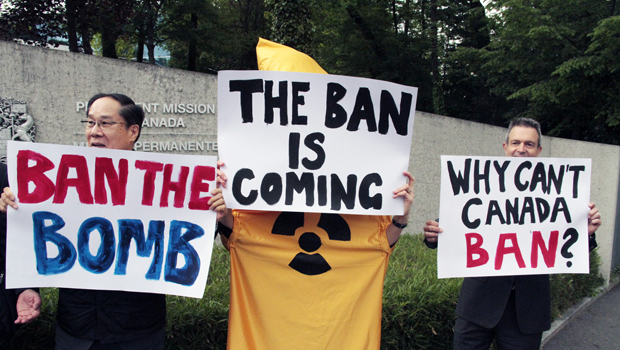 By the end of the main substantive session of the UN working group in Geneva in May, it is clear beyond doubt that an overwhelming majority of the world’s nations are ready to start negotiations on a treaty banning nuclear weapons.

At its third and final session, the UN working group in Geneva adopts a landmark report recommending that a UN conference be convened in 2017 to negotiate a legally binding instrument to prohibit nuclear weapons.

Austria’s foreign minister, Sebastian Kurz, announces that his country will join other UN member states in tabling a resolution in October to convene negotiations on a legally binding instrument to prohibit nuclear weapons in 2017.

In an address to the United Nations, the vice-president of the International Committee of the Red Cross says that the international community has a “unique opportunity” in 2017 to achieve a ban on the “most destructive weapon ever invented”.

Fifteen Nobel Peace Prize laureates, including the Dalai Lama and Desmond Tutu, sign an appeal urging nations to vote in favour of the UN resolution to launch negotiations in 2017 on a treaty to prohibit nuclear weapons.

27 October: European Parliament votes in favour of a ban

An overwhelming majority of the members of the European Parliament vote in favour of a resolution encouraging governments to support the convening of and to “participate substantively” in negotiations for a ban on nuclear weapons.

In the First Committee of the UN General Assembly, 123 nations vote in favour of a landmark resolution to begin negotiations in March 2017 on a “legally binding instrument to prohibit nuclear weapons”. There is resounding applause.

ICAN partner organization PAX releases its annual Don't Bank on the Bomb report, which shows that more and more financial institutions are adopting policies against the financing of companies that manufacture nuclear weapons.

In one of its final acts before Christmas, the UN General Assembly confirmed that negotiations will begin in 2017 on a treaty prohibiting nuclear weapons, despite the fervent opposition of some nuclear-armed nations.

March to Ban the Bomb