In a meeting with Hiroshima survivor Setsuko Thurlow and a delegation of ICAN campaigners, Mayor Ada Colau of Barcelona announced the passage of a resolution by the city to support the ICAN Cities Appeal and called on the Spanish government to join the TPNW.

A resolution committing the City Council of Barcelona to join the ICAN Cities Appeal and to call on the Spanish government was passed by a decisive cross-party vote with 37 of 41 city councillors voting in favour on 19 February. Barcelona’s decision comes as a result of a concerted lobbying effort by ICAN partners in Spain, including FundiPau, IPPNW, Mayors for Peace, Mundos sin Guerras and Pressenza. 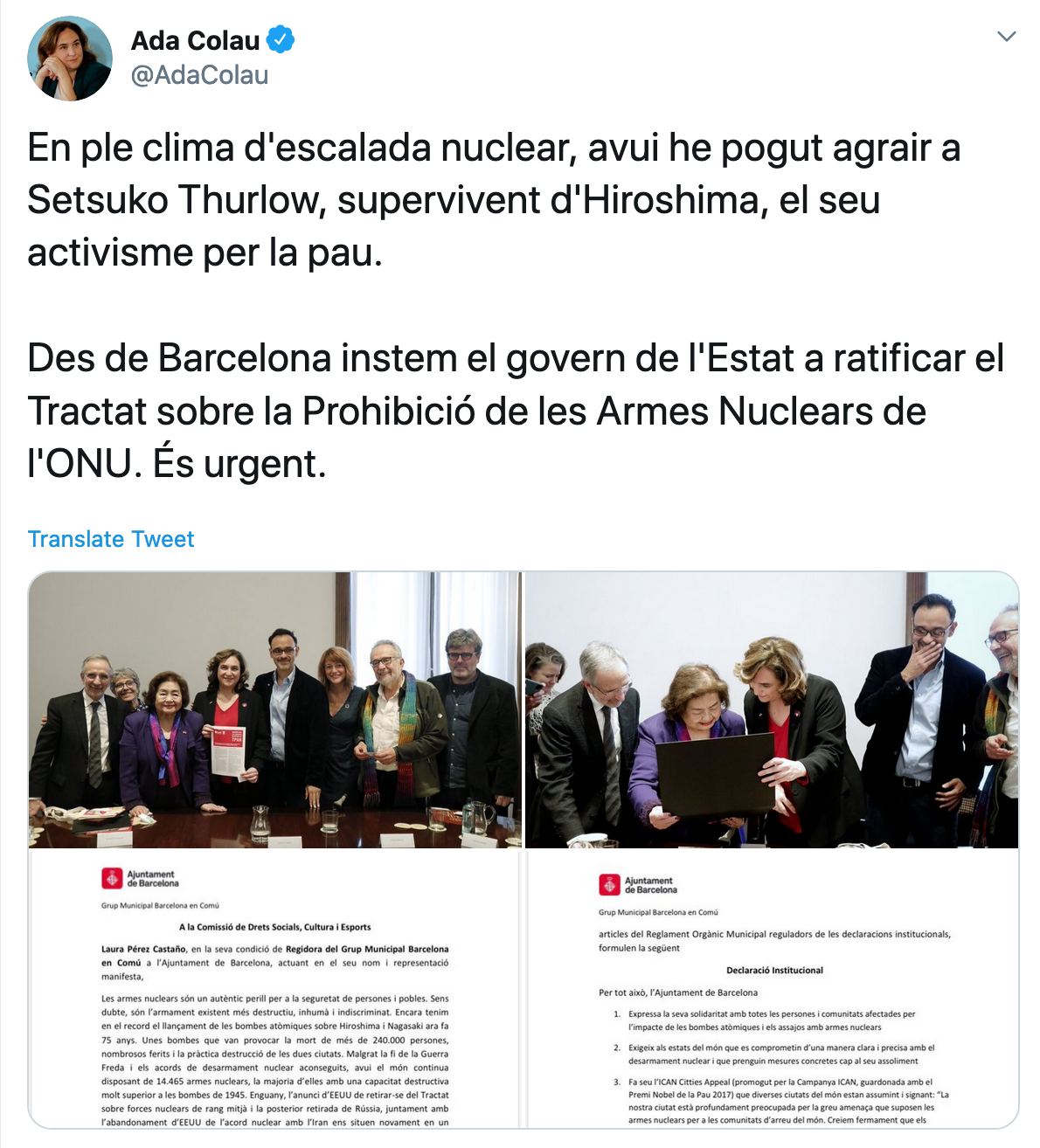 Setsuko Thurlow, survivor of the atomic bombings of Hiroshima personally delivered the Appeal to Mayor Colau, said, “I was so impressed by the warm welcome we received from the City of Barcelona, Mayor Colau in particular. She was so serious about our message; not just hearing it, but committing to action. Now I can really see Barcelona’s endorsement of the ICAN Cities Appeal as part of a bigger step to push for Spain’s ratification of our Treaty. I believe in the sincerity of their commitment to do so.”

The ICAN Cities Appeal is a commitment by a city or other local authority to endorse the TPNW, call on its government to join the treaty and take other measures in support of its principles, including on divestment. As cities are the main targets of nuclear weapons, cities have a special responsibility to their constituents to speak out against any role for nuclear weapons in national security doctrines. The pressure from the grassroots, catalyzed by city governments, can contribute directly and significantly to the success of the TPNW.

According to ICAN Campaigner Carlos Umaña of IPPNW, “The city of Barcelona is very significant, not only for Spain, but for Europe. In this landmark motion, not only has the community of Barcelona given its full support to the TPNW, with an overwhelming majority of votes from across most parties, but the mayor herself, Ada Colau, demonstrated her personal commitment to get Spain to sign the treaty. Mayor Ada Colau is herself a key player in Spanish politics, and Cities Ambassador to the UN. To have such a strong commitment and support from her is truly significant.”

The ICAN Cities Appeal in 5 steps!