Bangladesh has signed and ratified the Treaty on the Prohibition of Nuclear Weapons.

Abul Hassan Mahmood Ali, the minister for foreign affairs of Bangladesh, signed the treaty on 20 September 2017. His successor, A K Abdul Momen, deposited the country’s instrument of ratification with the UN secretary-general on 26 September 2019.

In a statement to the United Nations on the day of the deposit, Momen described the treaty as “a critical building block” for a nuclear-weapon-free world. He said that, once in force, it would “serve as an important international instrument for stigmatising nuclear weapons”.

Bangladesh participated in the negotiation of the treaty at the United Nations in New York in 2017 and voted in favour of its adoption.

Bangladesh has promoted universal adherence to the treaty, including by co-sponsoring a UN General Assembly resolution in 2019 that calls upon all states to sign, ratify, or accede to the treaty “at the earliest possible date”.

In its opening statement to the negotiating conference, Bangladesh said that the treaty “can serve as an international common standard for stigmatising nuclear weapons and can send an unequivocal message about the inhuman and indiscriminate impact of the use of nuclear weapons”.

In 2016, Bangladesh voted in favour of the UN General Assembly resolution that established the formal mandate for states to commence the negotiations in 2017 on “a legally binding instrument to prohibit nuclear weapons, leading towards their total elimination”.

Prior to the adoption of the treaty in 2017, nuclear weapons were the only weapons of mass destruction not subject to a comprehensive, globally applicable treaty prohibition. Bangladesh supported calls in the UN General Assembly fill this “legal gap”. 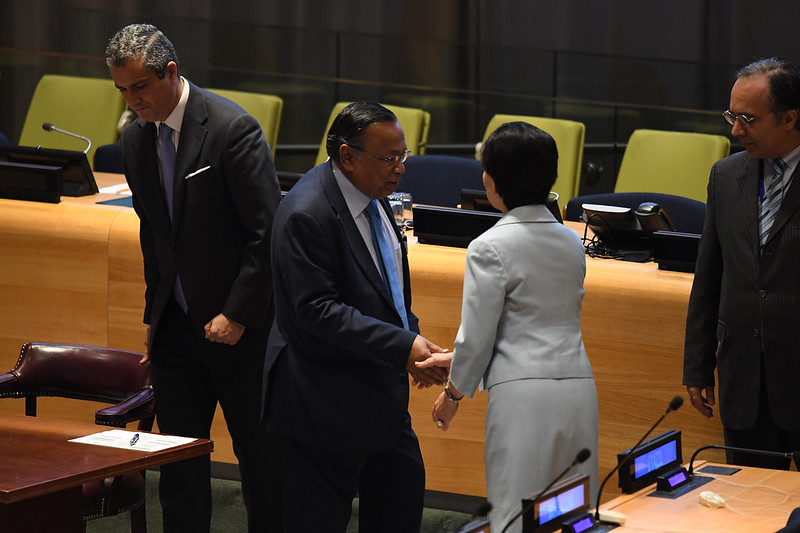 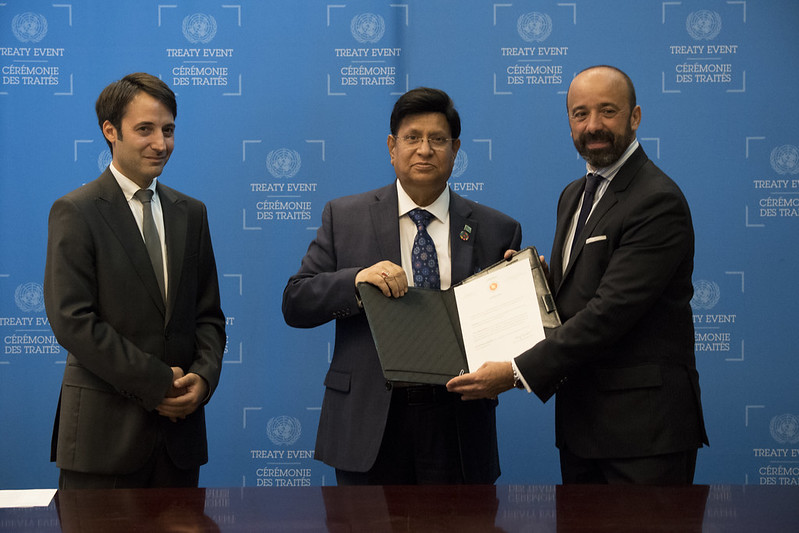 H.E. Dr. A. K. Abdul Momen, MP, Minister for Foreign Affairs of Bangladesh, deposits the instrument of ratification for the Treaty on the Prohibition of Nuclear Weapons on 26 September 2019. Photo: ICAN | Darren Ornitz