Hiroshima, Nagasaki and the #nuclearban

This week the world commemorated the 73rd Anniversary of the nuclear attacks on Hiroshima and Nagasaki. These attacks cost the lives of over 200,000 people, plagued many thousands more with cancer and disease over the course of decades and cast the dark specter of the nuclear threat over the world, which persists to this day

The Hibakusha and the Nuclear Ban Treaty

Every year we honor the innocent lives that were lost and pay tribute to the survivors – the Hibakusha – many of whom have dedicated their lives to ensuring no one suffer the same horrible fate as their fallen comrades did. The 2017 Nobel Peace Prize was a fitting tribute to the tireless efforts of the Hibakusha, who served as a central inspiration to achieve the UN Treaty on the Prohibition of Nuclear Weapons (TPNW).

But the Nuclear Ban Treaty is much more than just a symbol of rejection of nuclear weapons. For campaigners and activists around the world, the Nuclear Ban Treaty is a rallying call, an advocacy tool and a basis for progress towards nuclear disarmament. The most meaningful way to honor the Hibakusha is to answer their appeal for a nuclear weapons free world and make concrete progress towards nuclear disarmament – the TPNW, the first globally applicable multilateral agreement to comprehensively ban nuclear weapons, is one of them.

A recent poll showed that over 80% of the Hibakusha demand that the Japanese government join the TPNW. At both memorial ceremonies in Japan this week, and at the many memorial ceremonies all over the world, the treaty was hailed as the tbest way o make sure it would never happen again, our only real path to a future without nuclear weapons.

The Nuclear Ban Treaty vs the nuclear umbrella

Nevertheless, the Japanese government continues to try to blur the issue, issuing hollow statements and paying lip service to the Hibakusha every so often, while encouraging the US to maintain and even enhance its nuclear weapon capabilities. Japan may be the most disturbing example of a government ignoring the dangers of nuclear weapons, but it is by no means alone. Dozens more countries pursue the same practice of maintaining a role for nuclear weapons in their national defense, at the risk of us all. 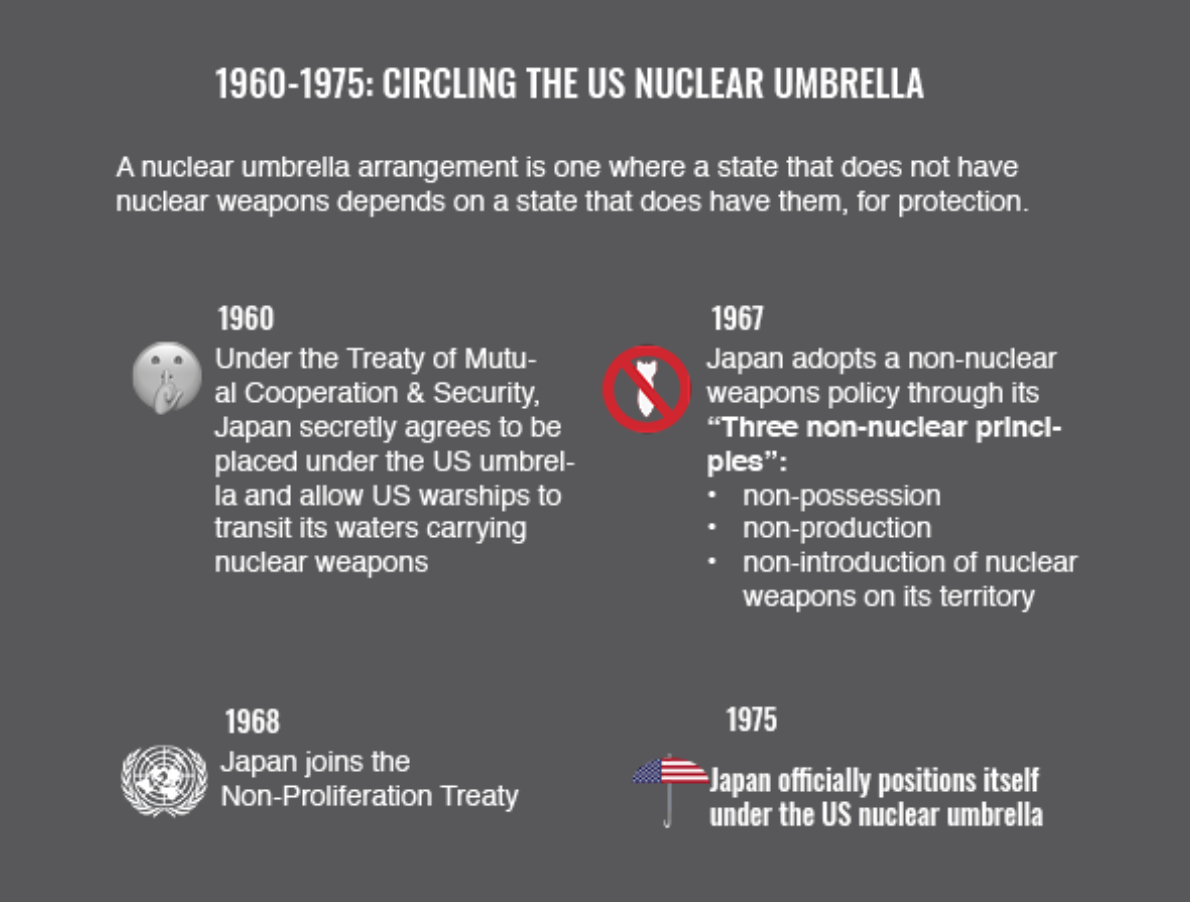 The critics – from governments and some corners of academia – are keen to obscure the issue: for decades Hibakusha and disarmament campaigners have been told, “it’s not as simple as that”. Ban treaty proponents are accused of being reductive: we are ignoring strategic stability and the “legitimate security interests” of a few states; we are trying to achieve a “short cut” to nuclear disarmament. But the truth is that each and every state that participates in a “nuclear umbrella” agreement is an obstacle to nuclear disarmament. And more and more, the TPNW helps expose these states as enablers of the new nuclear arms race, which will, inevitably, lead to disaster unless we change course.

Time to leave the umbrella

Nuclear-armed states will probably continue to oppose the Nuclear Ban Treaty and pressure others to do the same, but we take it as validation of the Treaty’s salience and relevance – they know there is no turning back. The world has chosen to embrace a future without nuclear weapons, and the Treaty sets the stage for that to happen.

The Nuclear Ban Treaty will affect the nuclear-armed states and the umbrella states, whether they choose to join the treaty or not.
In fact, it is already starting to happen: Major banks and financial institutions around the world are already pulling out of funding any companies involved in nuclear weapons activities, because they know that when the Treaty comes into force, those investments will not only be a huge financial risk, they will also be illegal, and a reputational risk to boot. And just like the ban treaties on chemical weapons or land mines, the Nuclear Ban Treaty will also strengthen the public’s perception that nuclear weapons are illegitimate and unacceptable, and that their countries are on the wrong side of history.  In fact, recent YouGov polls in the four European countries that host US nuclear weapons as part of their umbrella arrangements – Belgium, Germany, Italy and the Netherlands- showed that a vast majority of their citizens actually reject those nuclear weapons, and want their country to sign up to the Nuclear Ban Treaty.

So it is time for the citizens of the world to stand up and demand that their governments listen. In the words of Tomihisa Taue – Mayor of Nagasaki: “to the people of the world, please demand that the governments and parliaments in your countries sign and ratify the Treaty on the Prohibition of Nuclear Weapons.”