INF Treaty Suspension: What does the vote in Russian Duma mean?

On 18 June 2019, lawmakers in Russia’s State Duma voted to support a decree by President Vladimir Putin to suspend the country’s participation in the Intermediate Nuclear Forces (INF) Treaty, citing a need to protect Russia’s national interest. The Treaty is scheduled to terminate on 2 August 2019, after the six-month notice period expires following the US and then Russian withdrawals from the Treaty.

The vote in the Duma comes after months of public disagreements between the two states about the allegations that Russia was violating the INF Treaty, and against the backdrop of a new nuclear arms race. When the US presented its intended withdrawal from the INF Treaty on 1 February 2019, President Vladimir Putin responded in kind by announcing Russia was suspending its observance of the Treaty. [1]

With the June 18th vote, Russia’s Lower House of Parliament appears to be signalling its support for President Putin’s decision and Russia’s position that it is not at fault of the Treaty’s collapse. According to Viacheslav Volodin, Chairman of Duma, Russia has done everything to preserve the contractual obligations assumed by the USSR and USA in 1987 and guaranteed global security for all countries in the world: “But the actions of the United States of America lead to violation of this Treaty, and our repeated proposals to preserve contractual obligations were unsuccessful.”

The bill on the Treaty’s suspension adopted by the Duma today also allows President Putin to resume the treaty’s implementation at his discretion [2]. The upper house of parliament is expected to consider the bill on June 26. [3]

What’s next for the INF Treaty ?

If nothing changes, the INF Treaty will terminate on 2 August 2019, unless both parties agree to lift the suspension and resume compliance with the Treaty.  If Russia and the US were genuine in their commitment to nuclear disarmament, both would be doing everything they can to save the Treaty in the coming two months. Yet the clear political signalling around this vote, and the public accusations made back and forth between the two states, hint that both are actually happy to see the treaty come to an end.

Since the announcement of the US withdrawal, both countries have been increasingly vocal about modernising, rebuilding and growing their nuclear arsenals. A new nuclear arms race has begun. Recent research indicates that the most heavily nuclear armed states are ready to produce missiles that fall within the prohibited range (between 500 and 5,500 km), and that public and government investments in nuclear weapons producing companies have increased significantly since the announcement of the Treaty’s demise [4, 5, 6]. 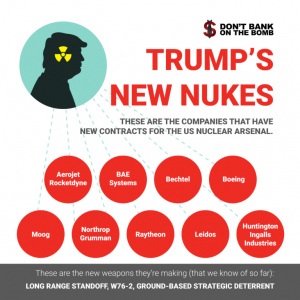 Learn more about the companies profiting off nuclear weapons

While the INF Treaty primarily bound Russia and the United States, its demise endangers the entire world. The only ones applauding the decision to tear up this Treaty are the nuclear weapons manufacturers, eagerly anticipating the arrival of Cold War II.
–

[3]hState Duma supported the decision of the President of the Russian Federation to suspend the INF Treaty | Duma.gov.ru

[4] The US has started a “new nuclear arms race” since Trump pulled out of the INF treaty |Quartz, May 2019

[5] Producing mass Destruction: Private companies and the nuclear weapons industry | Don’t Bank on the Bomb, May 2019

[6] Shorting our security- Financing the companies that make nuclear weapons | Don’t Bank on the Bomb, June 2019