84% of Finns want the government to join the TPNW

84% of Finns support Finland joining the UN Treaty on the Prohibition of Nuclear Weapons (TPNW), according to a poll by Kantar TNS Oy, commissioned by ICAN Finland, a network of ICAN partners based in Finland.

“Finns clearly understand that nuclear weapons are a real threat. As the tensions in the international geopolitical climate has increased, so has the risk of nuclear war. The only way to avoid a catastrophe is to completely ban and destroy nuclear weapons,” said Kati Juva, co-coordinator of the ICAN Finland network.

Finland chose to join nuclear weapon-possessing states in boycotting the negotiations of the Treaty on the Prohibition of Nuclear Weapons in 2017 and has since refused to take steps towards signing and ratifying it. 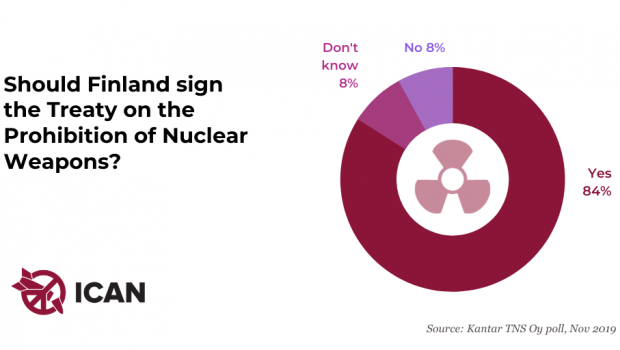 With a new coalition government in place — and with a huge majority of the population in favour — there is hope that the current administration will reassess its position and decide to align itself with what the President of the International Committee of the Red Cross Peter Maurer has called, “an indispensable tool to ensure that these weapons are never used again.”

Joining the Treaty would allow Finland to back up its lofty words on nuclear disarmament with concrete action. According to Claus Montonen, co-coordinator of the ICAN Finland network, “At the UN, Finland has declared its support for and commitment to all serious initiatives for nuclear disarmament. The Treaty on the Prohibition of Nuclear Weapons (TPNW) is by far the most serious attempt to achieve a total ban on nuclear weapons and the only nuclear disarmament initiative that is going on today. Finland must sign the TPNW and work to promote it in all fora.”

The results of the survey are consistent with a survey last year in Sweden, in which 85% of the public were in favour of Sweden joining the TPNW. Polls in the nuclear weapon-hosting States Belgium, Germany, Italy and the Netherlands also demonstrated a clear rejection of the hosting agreements and strong support for the TPNW.

Observing the 1MSP for governments