About this Event -
Setsuko Thurlow & Toronto’s Hiroshima Nagasaki Day Coalition (HNDC),
invite you to join us in peace to commemorate the 75th anniversary of the atomic bombings of Hiroshima & Nagasaki: 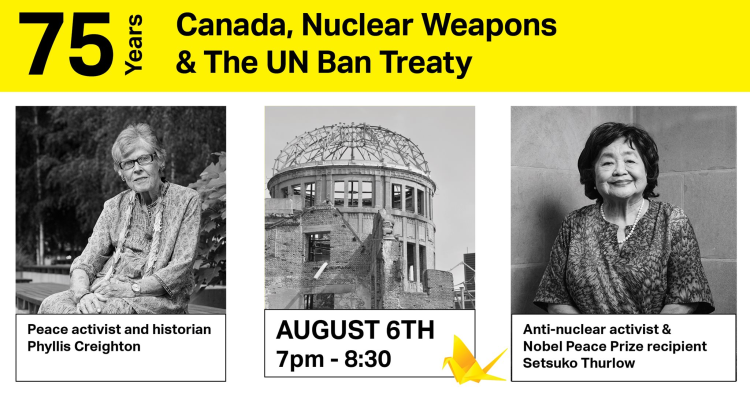 Registration is required for this FREE/ PUBLIC ONLINE event via Eventbrite

Setsuko Thurlow, international disarmament advocate & hibakusha, will speak on nuclear weapons and future paths to disarmament.  Setsuko co-accepted the 2017 Nobel Peace Prize for the International Campaign to Abolish Nuclear Weapons (ICAN) and continues to campaign globally for adoption of the United Nations’ Treaty on the Prohibition of Nuclear Weapons.

With 75 years of living under the nuclear threat, Setsuko invited peace activist and historian Phyllis Creighton to speak on Canada’s contribution to the development and proliferation of nuclear weapons and Canada’s undeniable responsibility for action.  Setsuko and Phyllis will be joined by Grammy-nominated flautist Ron Korb & the Ogichidaa Kwe drummers.