About this Event -
POSTPONED: NUCLEAR BAN TREATY CELEBRATION AT RAYTHEON & UNIVERSITY OF ARIZONA

Last week, the Associated Press reported that Arizona is the COVID-19 “hot spot of the world”. With hospitals full and cases expected to increase in coming weeks, we have decided to postpone the Tucson celebrations for the Treaty on the Prohibition of Nuclear Weapons. We will celebrate together on the one year anniversary: January 22, 2022!


In the meantime, there are things you can do from home on January 22, 2021 to amplify the good news and mark the historic day that the treaty enters into force, and nuclear weapons are illegal. Please see information below on how you can express your support for the treaty.


We will continue, on January 22 and beyond -
* to call on the University of Arizona to cut its ties to Sandia National Laboratories for research collaboration and workforce recruitment for its nuclear weapons work.
* to call on Raytheon to cease development and production of the new LRSO nuclear cruise missile.
* to call on the United States to sign and ratify the Treaty.

Celebrate with others around the world and show your support: On January 22, 2021, the Treaty on the Prohibition of Nuclear Weapons will enter into force and nuclear weapons will be illegal!

JOIN THESE ACTIONS FOR A NUCLEAR-FREE FUTURE

(details below)
Also, tomorrow, January 17 at 3:30 PM you can listen to the 30 Minutes show on KXCI Community Radio 91.3 FM. Amanda Shauger interviews Alicia Sanders-Zakre, the policy and research coordinator of the International Campaign to Abolish Nuclear Weapons (ICAN). Sanders-Zakre contributed to the ICAN report about the 50 U.S. universities involved in nuclear weapons research and design, including the University of Arizona: https://universities.icanw.org/.
You can also join the watch party as the International Campaign to Abolish Nuclear Weapons livestreams Studio 22.21 beginning at 1:00 p.m. (Tucson time) on January 22.  This event from Geneva, Switzerland will feature guests connecting digitally from all over the world, tracking the global entry into force of the historic treaty throughout the world’s different time zones, mixing performances, interviews, in-depth analysis and reportages from artists, politicians, academics and activists around the world.


There are more ideas for What You Can Do here: https://orepa.org/what-you-can-do/

• On January 22, the Treaty on the Prohibition of Nuclear Weapons enters into force as international law.
• In April, 2020, Raytheon Missiles & Defense was awarded a multi-billion dollar contract to produce the Long Range Stand-Off missile (LRSO), designed to be armed with a nuclear warhead.
• The Treaty acts to outlaw such work.
• While the Treaty lacks legal force here because the United States has not yet signed on, the moral force, diplomatic and trade impacts of this global condemnation of nuclear weapons cannot be overlooked.
• We are opposed to Raytheon profiting from the production of a new generation of nuclear weapons in Tucson.
• Raytheon exploits the need for good-paying jobs in our community with jobs that make possible the total destruction of other communities around the world.
• We will oppose any more city, county or state financial assistance to, or investment in, Raytheon Missiles & Defense.
Raytheon Missiles and Defense, Tucson contacts
Public Relations office: [email protected]
Public Relations Personnel:

• On January 22, the Treaty on the Prohibition of Nuclear Weapons enters into force as international law.
• The University of Arizona is involved in "research collaboration and future workforce recruitment" for nuclear weapons programs through its partnership with Sandia National Laboratory's Campus Executive Program.
• The University must fully disclose the details of this partnership, because the work of Sandia National Laboratories is focused on the nonnuclear components of nuclear weapons and on nuclear weapons systems integration, for example connecting warheads to their missile delivery systems (such as those being produced now at Raytheon Missiles & Defense in Tucson).
• The Treaty outlaws this work.
• While the Treaty lacks legal force here because the United States has not yet signed on, the moral force of this global condemnation of nuclear weapons must not be ignored by an institution of higher learning.
• The University of Arizona must renounce this partnership, in as much as it serves to mentor and groom professionals to manage the production and use of nuclear weapons.
Contact:
University of Arizona
Office of the President
Dr. Robert Robbins
[email protected]
520-621-5511
Fax: 520-621-9323

3) MAKE A GREAT NOISE FOR 5 MINUTES AT NOON

Around the world, churches will celebrate by ringing their bells at noon, including in Tucson at St. Mark's Presbyterian Church, Grace St. Paul’s Episcopal Church and St. Michael and All Angels Episcopal Church.
You can join in! Just step outside your front door at noon on January 22 and for five minutes ring a bell, play a musical instrument or bang on a pot or pan or lid! You can post a video on social media.

Take a photo of yourself with one of these 8 1/2” x 11" signs, or make one of your own! Use the hashtags #nuclearban and #TPNW and post it on 1/22/2021 on Facebook (including on the Nuclear Ban Treaty EIF page), Twitter, Instagram and elsewhere.

Join thousands of peace-loving people on this historic day, which the International Campaign to Abolish Nuclear Weapons (ICAN) so eloquently describes as “the beginning of the end of nuclear weapons”! 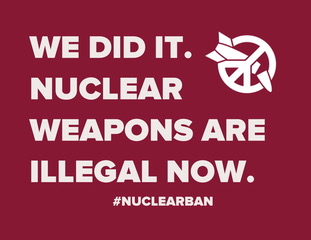 Standout with signs and banners, notice, letters in papers