The second summit between Donald Trump and Kim Jong Un in Hanoi has drawn to a close without a new deal on the table, providing further evidence that the complete, irreversible and verifiable denuclearisation of the Korean Peninsula will require an international process based in international law.  Anything less will not stand the test of time, particularly if it is solely dependent on these two unstable men. The process must be internationalized.

From Hanoi, Akira Kawasaki, member of ICAN’s steering group responds:  ”It is little wonder these negotiations broke down after Trump has spent more time in office blowing up nuclear treaties than building them. The failure of these talks is further evidence that denuclearisation of the Korean Peninsula cannot be left with these two temperamental men. We need a real plan rooted in the international community and treaties like the Treaty on the Prohibition of Nuclear Weapons, which the Koreas could join tomorrow and begin the disarmament process with legitimacy.” 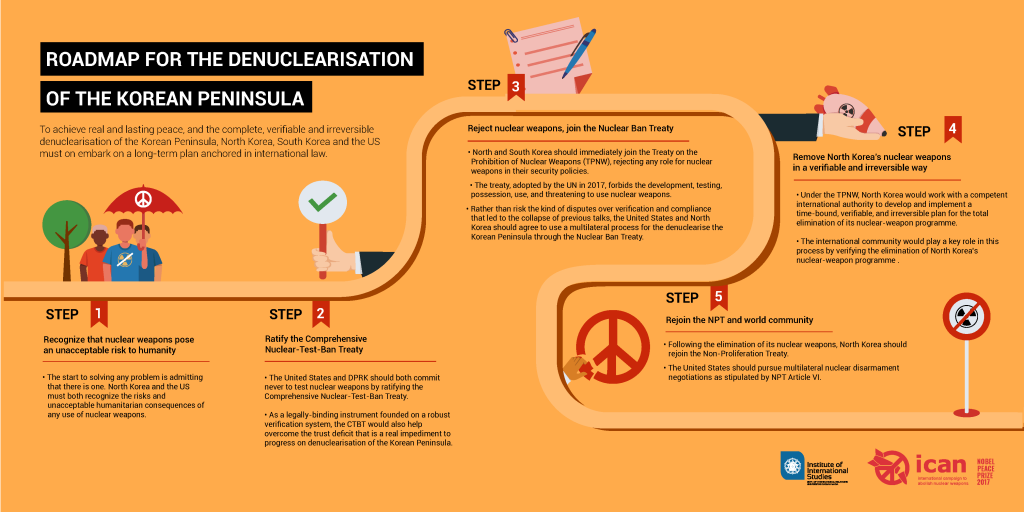 Kawasaki was in Hanoi to present ICAN’s Roadmap for the Denuclearisation of the Korean Peninsula, which provides a framework for the full, irreversible and verifiable denuclearisation of the region that is clear and achievable. The roadmap is based within international law, and requires the states involved to recognise the risk of nuclear weapons, ratify the Comprehensive Test Ban Treaty (CTBT), reject weapons by joining the TPNW, remove existing weapons with verifiable plans, and North Korea rejoining the world community through full implementation of the Non-Proliferation Treaty. ICAN’s Roadmap was formulated ahead of the first summit in Singapore, in consultation with approximately 30 nuclear disarmament experts, including authorities from the top nuclear agencies, academia, civil society and the diplomatic corps, and it remains a stronger path to concrete results than anything we have seen coming from the dialogue between the US & DPRK over the past 8 months.

What happens next is unclear. It is encouraging to hear President Trump and Secretary Pompeo say that future negotiations are an ongoing process. Diplomacy is always preferable to war rhetoric. But lasting peace with nuclear weapons is a dangerous illusion. The escalating nuclear arms race between the US and Russia, and the conflict between India and Pakistan remind us that even a single miscalculation can lead to a nuclear war. The consequence would be catastrophic and far-reaching. We must put an end to the myth of nuclear deterrence, and act for a world free of these weapons designed to mass murder civilians.  It is time for all responsible countries to join the UN Treaty on the Prohibition of Nuclear Weapons.

Doomsday Clock set to 90 seconds to midnight, here’s the plan